T. rex had several close relations. One was a diminutive cousin: Nanuqsaurus, which was 2.4 times smaller, and lived in the chilly high latitudes of North America. Nanuqsaurus‘ relatively small size was a cold-weather adaptation.

Dakotaraptor was a North American native. Unlike T. Rex, Dakotaraptor had long arms, with wings that stretched 1 meter.

Dakotaraptor was far too big to fly. The wings improved balance when running, providing lift that gave speed. 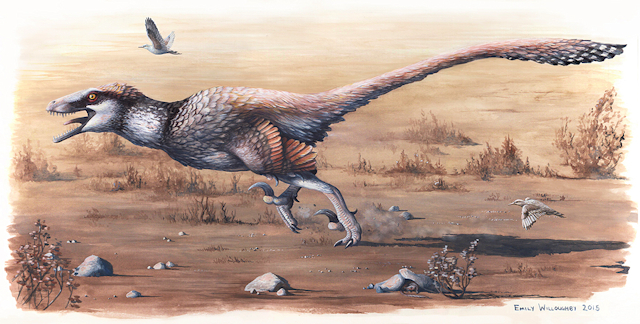 Dakotaraptor was a fierce predator. An agile runner with long legs, Dakotaraptor had sickle claws the size of a man’s hand on both front and rear limbs that acted as grappling hooks.

These claws could grab on to anything and just slice them to bits. It was utterly lethal. ~ American vertebrate paleontologist Robert DePalma

At 5–6 meters long, Dakotaraptor was one the largest dromaeosaurids (feathered theropods). Only Utahraptor, at 7 meters, was larger. Utahraptor was an earlier, close cousin to Dakotaraptor, with similar wings and claws. Both evolved late in the dinosaur reign.

Dakotaraptor probably practiced pack hunting, with ad hoc stratagems to bring down prey. Able to run down animals that T. Rex could only watch, the speed of Dakotaraptor was fearsome. Feathery wings got off to an impressive start.