Dinosaurs were landlubbers. Until this one. ~ Paul Sereno

Giant fish lived in the rivers of North Africa during the Cretaceous. A theropod arose to take advantage of the aquatic feast.

Spinosaurus grew to be the largest known carnivorous dinosaur: 12.6–18 meters long, weighing 7–21 tonnes. Spinosaurs had large, strong forelimbs with scythe-like claws. Its hind legs were short, with splayed toes. Spinosaurs may have paddled in the water like a duck. Its long, flexible tail assisted propulsion. 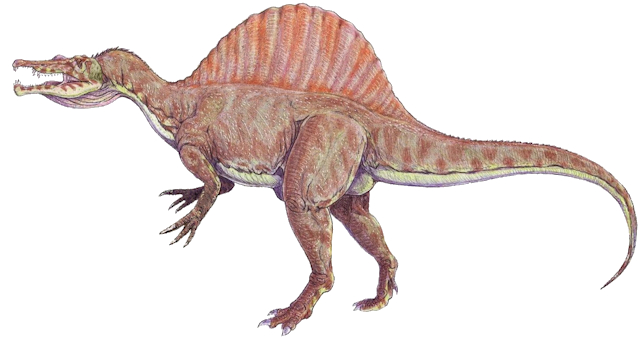 Conical teeth in a crocodilian snout overlapped, acting as a snare for trapping fish. Spinosaurs had nostrils halfway up its skull, so it could stick its snout into the water and still breathe.

Spinosaurs’ center of mass was too far forward for it to stand on its hind legs on land, like other theropod predators. Instead, spinosaurs ambled on all 4 legs.

Similar to the synapsids of old, spinosaurs had spines growing out of its vertebrate – up to 1.65 m long – that provided for a sail which likely served for sexual display, and perhaps aided thermoregulation.

The skull and lifestyle of spinosaurs were suggestive of crocodiles, which later convergently evolved to take advantage of freshwater aquatic fare. Like crocodiles, spinosaurs spent much of their day in the water, while resting and mating on the riverbank.

It’s like a cross between an aquatic bird and a crocodile. ~ Paul Sereno