Sauropods
The earliest sauropods were small and ran on 2 legs, relying on speed to evade predators. Then, in evolutionary time, they grew until girth became their edge against predation. 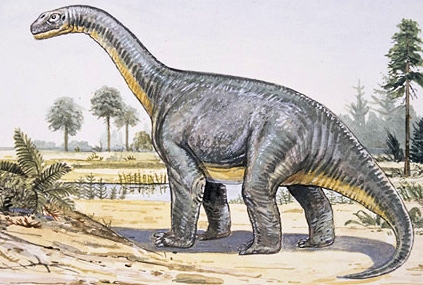 Though most long-necked sauropods lumbered on 4 legs to support their bulk, a few up to the size of rhinoceroses went from walking on 4 legs to 2 as they matured. During development, their center of mass moved back toward their hips as their tail muscles became bulkier. This allowed these herbivores to reach higher in the trees to feed.

Earth was so warm during the Jurassic that dinosaurs lounged in Antarctica, which was a much larger continent at the time. Giant sauropods weighing up to 77 tonnes seasonally migrated to maintain their ravenous diet of greens: requiring over 450 kilograms each day, twice that of modern elephants.

Sauropods started life as an egg the size of a grapefruit. Baby sauropods were less than a half meter long and weighed under 10 kilos.

To reach their gargantuan size, sauropods had a tremendous growth rate between 5–25 years old. They reached their adult size by the time they were 30.

Sauropods became a disparate group, with sizes and body plans varying as plate tectonics drove species radiation. Separate sauropods lived side by side. A diversity of dining habits on various vegetation afforded each sauropod species its own niche.

The climate engendered prolific vegetation. As always, the success of animals ultimately rides upon greenery.

Some of the same sociality exhibited by birds and mammals was shared by dinosaurs. Predators often hunted in packs. Gregarious sauropod herbivores foraged in herds, though juveniles and adults may have done so separately, as their diets differed, as did their bulk.

Sauropods arose in the Late Triassic. By the end of their spectacular 150-million-year run, when all large dinosaurs became extinct, sauropods had lived on every continent.

The dinosaur’s eloquent lesson is that if some bigness is good, an overabundance of bigness is not necessarily better. ~ American businessman Eric Johnston