Ornithischians arose in the Jurassic. All were beaked herbivores; typically, low browsers. The surfeit of herbivorous dinosaurs owed to niche differentiation: specialization to favor different plants. The vast diversity of vegetation provided the platform upon which these picky plant lovers evolved.

Like sauropods, ornithischians were typically herd animals, though some appear to have led largely solitary lives. Although descendant from bipeds, almost all ornithischians had the ability to walk on all fours, if not natural quadrupeds.

Though less predominant than sauropods, ornithischians were among the most numerous, diverse, and longest-lasting lineages of dinosaurs. They were typically smaller than sauropods, and often prey to theropods. 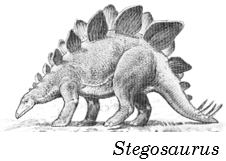 By the mid-Jurassic, ornithischians had a wide variety of body plans. This diverse group included thyreophorans, which were armored herbivores, such as the spiky plated stegosaurs (8–9 meters; 2–3 tonnes). The spiked tail of stegosaurs could deliver a painful piercing blow to a potential predator.

Owing to their relatively small brains, stegosaurs earned renown as the “dumbest” dinosaurs. As brain size is no indicator of intelligence, stegosaurs are not the ones deserving such labeling.

While armor may have been helpful for defense, it may also have evolved via sexual preference, or served for thermoregulation. Juvenile stegosaurs lacked the large back plates.

In contrast were the relatively small and agile bipedal ornithopods known as hypsilophodonts (1.5–2.3 m; 20–40 kg), which lived lives like those of the antelopes and gazelles today: herds foraging on ground vegetation while keeping a keen lookout for predators.

The differences between herding hypsilophodonts and heavy thyreophorans point out 2 viable strategies for avoiding predation: either be armored or raise the odds against being eaten by being small, nimble, and one in a crowd.

By the end of the Cretaceous, more ornithischians had arrived: among them duck-billed hadrosaurids, such as Parasaurolophus (12 m; 3 tonnes), and horned ceratopsians, of which Triceratops (9 m; 5–8 t) is the best known. Both were herbivores. The duck-billed dinosaurs had sophisticated dentation that let them grind tough plant matter.

Triceratops compensated for dental ingenuity with overwhelming numbers: over 400 teeth that replaced themselves when they wore down.

Triceratops at first lacked the magnificent horns that they are so well-known for. Early on they sported a longer beak and shorter horns.

Triceratops became a favorite food of tyrannosaurs. Triceratops‘ horns grew to even the odds against becoming an easy meal.

Beyond defense, ornaments that various ornithischians had may well have developed from sexual selection. The neck frills of triceratops are exemplary. Female choice of mate that evolves into exaggerated looks has repeatedly occurred.

Dinosaur head ornaments were for a select few. To sport standout head gear, a dinosaur had to have a big body to viably support it.