All terrestrial vertebrates rely on bone for bodily rigidity, to anchor muscles, and to protect vital organs. Bone is not the only evolutionary possibility.

Because it can be rigid, tough, or flexible as need be, chitin is the select material of structural integrity in arthropods. But chitin has some severe limitations. A glucose derivative, chitin is a non-living material: spun fibers bound by cross-linked proteins. Chitin cannot be stretched or reabsorbed to afford growth. Its employment obliges arthropods to repeatedly undergo complicated shedding regimes during development.

Made of protein fibers, keratin is somewhat like chitin as a structural material. Keratin was an innovation for vertebrates, and is used for nails, scales, horns, beaks, claws, hooves, and hair. Unlike sugar-based chitin, protein-based keratin can grow continuously, and so is employed for structures which naturally wear away.

For supporting a body, especially on land, bone cannot be beat. Bone is a physiologically active tissue that can change size and shape during development. The assembly of bones as skeletons allows flexible and efficient motion, as each bone can be stiff enough to resist the local forces of compression, shearing, or bending. 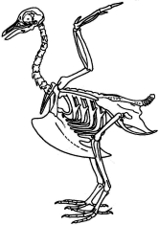 The schematics of skeletons are generally consistent among vertebrates, including the arrangement of the skull and lower jaw, the string of vertebrate that compose the spine, and limbs that have a single large bone near the body, a middle section comprising a pair of bones, and an outer instrument that is a fan of digits. Most the major body plan innovations among vertebrates involve variations in the shapes of these structures. There are however significant distinctions between birds and those animals unable to take to the air.

Whether on land or in the water, an animal’s skeleton maintains body shape during movement. In terrestrial animals, bones keep a body off the ground: a constant gird against gravity. Bird bones must do something more: allow lift off the ground. To accomplish this, the avian skeleton trades off sturdiness for lightness.

With fewer bones than a reptile or a mammal, a bird is uniquely built to withstand the forces of flight. ~ American biologist Joanna Burger

Pedestrian birds like the ostrich are built with bones like mammals, but a bird that flies resembles an assemblage of springs and levers under tension rather than a sturdy framework.

Early dinosaurs had as many as 9 wrist bones. The evolution of bird wings improved economy on that account, as bird wrists have only 4 bones.

Bird bones reflect a commitment to flight, most notably a centralization of muscles near the body’s core. Centralization requires that some bones provide broad surfaces for attaching large muscles. Centralization also results in bones with highly sculpted surfaces for guiding the bunches of tendons that frequently cross more than 1 joint. The wicker basket the comprises a bird’s skeleton holds a more much elaborate architecture than mammals.

Bird bones are best known for being hollow, but the savings in weight of hollow bones is only 8–13% less than a comparable marrow-filled bone. The hollow construction instead sacrifices flexural (bending) strength for high torsional strength: the ability to withstand a twisting load.

Further, the hollow core of avian bones is not empty space. Bird bones are instead chambers put to several uses. Most are filled with air that connect to the air sacs that are part of a bird’s unique respiratory system.

Other bones are used for storage. Some hold the calcium supply for producing eggshells. Some have the fat-rich marrow ubiquitous in mammal (and dinosaur) bones.