Sitting quietly, doing nothing, spring comes, and the grass grows by itself. ~ Zen proverb

From their origination as algae, the overall evolutionary trend in plants has been to survive in drier climates.

The extinction event 66 MYA caused a loss of plant life that temporarily crimped the carbon cycle, resulting in rapid global warming: hotting up 6 °C in 20,000 years. The air became drier.

Angiosperms adapted to deal with the aridity by sprouting grasses (the Poaceae family). Several design features put grass in a prime place to propagate across the savannas that surged in the aftermath. The design incorporated anticipated damage from herbivory.

Grass blades grow from the base of the blade, not from elongated stem tips in the tradition of trees. This low growth point affords grasses to be grazed or cut down without severely damaging the plant. 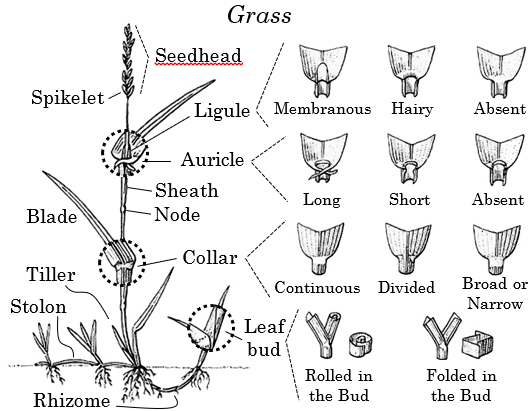 Hollow stems (culms) with interval plugs – nodes – are another damage-control mechanism. A break at a node leaves the one below still viable.

Grass leaves are built resilient: laid out in an alternate, distichous (single plane) arrangement, seldom spiraled; and with parallel veins which allow a part of the leaf to be bitten off without horribly disrupting the circulatory system.

Grass leaf blades are hardened from silica phytoliths: uptake of monosilicic acid from groundwater, incorporated to hone blade edges to a sharpness that can cut human skin.

A ligule lies at the junction between culm (sheath) and blade, preventing insects, or even water, from penetrating the sheath.

Unlike the mutualistic marriage of convenience that flowers embraced with insect pollinators, grass reproduction is self-contained: a plant has both sexes (hermaphroditic), and pollination is literally on the wind (anemophily). Maize is an exception: not hermaphroditic but still anemophilous.

Bees generate an electrostatic field that helps their bodies collect pollen. Ragweed is wind pollinator, not visited by bees, but found in their honey as an incidental pickup. Almost all pollens that are human allergens are anemophilous.

Many features that enable grasses to withstand drought also hold them in good stead from the stresses of grazing and the frequent fires which become more common during dry times.

The rise of grasses profoundly affected global fauna. Reptiles and dinosaurs did not diet on grain. Meanwhile, the little rodents that evolved to many mammalian forms, destined to dominate the landscape of the Cenozoic, coevolved to pillage Poaceae. The dentitions of hoofed mammals were well-adapted to chewing cellulose and the silica-rich leaves of grasses.

There are now more than 10,000 grass species, dominating ecosystems on over 30% of the Earth’s land surface. Wild cereals were the earliest crops to be cultivated. Grains provide over half the carbohydrates for humans worldwide.