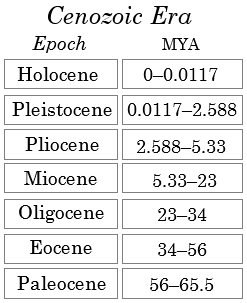 55.8 MYA came the Paleocene–Eocene Thermal Maximum (petm), a period of rapid global warming: 6 ºC in 20,000 years. By the end of the Eocene there were no significant ice sheets on Earth.

A bolide started a chain reaction. Tectonic shifts, including volcanic activity, triggered a spike in what had been a steady pace of warming. The North Atlantic was opening up at the time from seafloor spreading. A feedback loop ensued. In sum, ~1,500 billion tonnes of carbon were released, as well as much methane.

Some marine species went extinct, notably 50% of foraminifera, as did several terrestrial mammals. Primates suffered their first extinction event. Otherwise, climatic changes spurred fast adaptations that resulted in diversification under duress for many land mammals. The reptiles that had survived the dinosaur age enjoyed a brief renaissance.

Plants moved to higher latitudes as quickly as they could. Rain forests and mangrove thickets were found as far north as Belgium and Wyoming, and as far south as Tasmania. The Canadian Arctic sported palm trees.