The ancient African-Arabian continental plate collided with the Eurasian plate during the late Mesozoic. These continental collisions created mountains throughout Europe, the Middle East, and west Asia. This episode of mountain-building is known as the Alpine orogeny. 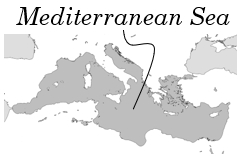 The Mediterranean Sea was formed during this process. As Africa-Arabia drifted northward, it closed over the ancient Tethys Ocean, which had flowed between the supercontinents Laurasia and Gondwana. What remained of the Tethys Sea became the Mediterranean, with a basin by way of stretched tectonic plates subducting from the Sea’s eastern edge.

During the Miocene, when sea levels were low, the Strait of Gibraltar closed. Evaporation ensued. The Mediterranean became a very salty, much smaller sea.

These episodes – of the Strait temporarily closing and reopening – happened multiple times between 6 and 5.3 MYA. It had a wrenching effect on habitats. Eventually, the Mediterranean basin was a desert, dotted by a few salty lakes.

Then, about 5 MYA, at the start of the Pliocene, sea levels again rose. The Atlantic surged past the Strait and refilled the Mediterranean Sea. From the end of the Miocene (5 MYA), climate in the Mediterranean basin changed from subtropical, with summer rainfall supporting laurel forests, to what it is today, with dry summers. Hence, modern life in the Mediterranean reflects an Atlantic heritage rather than the rich fauna inherited from the Tethys and Indian Oceans.

From the ancient Egyptians to Roman rule, the Mediterranean Sea played an essential role in the evolution of Western civilization, both as a natural resource and as a transportation thoroughfare. It is impossible to imagine human societal development in the region without it.