There is no such thing as devolution. ~ American biologist Michael Dougherty

English zoologist Ray Lankester criticized the Darwinian notion of evolution necessarily being progressive. After seeing apparent regressions during the life cycle of sea squirts, Lankester suggested in 1880 that life may revert to a more primitive state. Evolutionary developments were not always one-way.

Organisms which abandoned their independence for a life of parasitism were once considered devolved. Under this notion, viruses would be the ultimate degenerates, though their existence was not known when devolution was in vogue.

An organism is unable to return, even partially, to a previous stage already realized in the ranks of its ancestors. ~ Louis Dollo

This denouement became known as Dollo’s law. Preaching to the Darwinist choir, Dollo became much better known than Lankester. Dollo’s law is still accepted by many evolutionary biologists.

Dollo’s law of irreversibility states that once a complex trait has been lost in evolution, it cannot be regained. It is thought that complex epistatic interactions and developmental constraints impede the re-emergence of such a trait. ~ Scottish evolutionary biologist Kathryn Elmer et al

There are several other known examples of reversion evolution, including metamorphosis re-evolving in salamanders that had lived their entire lives as juveniles, and wings returning to stick insects which had lost them. Reversion evolution is further explored later in the book.

Decreasing complexity is common in the record of evolution. The lower jaw in vertebrates shows decreasing complexity, as measured by the numbers of bones, from fish to reptiles to mammals. (Evolution adapted the extra jaw bones into ear bones.) Likewise, ancestral horses had several toes on each foot; modern horses have a single toe with a hoof. ~ Michael Dougherty

In 1893, German zoologist Wilhelm Haacke hypothesized orthogenesis: that organisms have an innate direction in their evolution. Orthogenesists did not deny the influence of external factors, but rather stressed an internal goal-directed drive. The famous, fictional descent-of-man image is exemplary of the straight-line evolution proposed by orthogenesists.

Supporters of orthogenesis pointed to extinct animals, such as the enormous dinosaurs who needed so much food, and the Irish elk, with antlers so large that they contributed to the animal’s demise. Orthogenesists argued these excesses would not have arisen if the traits were not predestined. 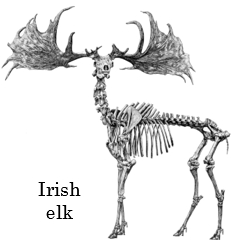 Wings for flight independently evolved at least 4 times (insects, pterodactyls, birds, and bats). American geologist and paleontologist Henry Osborn argued that such convergent evolution was convincing evidence of orthogenesis. Convergent evolution is now conventionally considered adaptive, but paradoxically without purpose. Therein lies the root issue: that orthogenesists could not identify the force behind directed evolution foretold its moribundity.

However much in the dark we may be, an assumption of a mystic, essentially teleologic force wholly independent of and dominating all the physico-chemical forces and influences that we do know – such a surrender of all our actual scientific knowledge in favour of an unknown, unproved, mystic vital force we are not prepared to make. ~ American entomologist and evolutionary biologist Vernon Kellogg in 1907

Purely empirical evolutionary biologists have the opposite problem of orthogenesists, in that they cannot explain how adaptation might work aimlessly. Vitalism, or lack thereof, remains the critical quandary of evolutionary theory.

Ronald Fisher rejected orthogenetic evolution in favor of particulate inheritance in his 1930 book The Genetical Theory of Natural Selection. Fisher touted genes as the hypothesized particles that cast Mendelian inheritance into a Darwinist mold.

Fisher’s work was a synthesis of surmises. Mendel’s results had been quite specific, confined to pea plants. Conversely, though highly influential, Darwin’s speculations were hand-waving. DNA was not discovered until 1953. Ironically, it was Haacke who first conceived of the concept of genes.