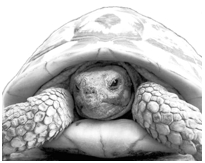 Of the amniotes, turtles have a unique body. Their shell is made of modified ribs, and their shoulder girdle is inside the rib cage.

Turtles (chelonians) abruptly appeared 250 MYA, in the Late Triassic, with no intermediate ancestry. (Pappochelys was a mid-Triassic diapsid with a few traits suggestive of turtles, including expanded ribs and related skeletal structures which allude (in hindsight) to being a precursor of a shell. The extinct, aquatic, turtle relative Odontochelys appeared in the Late Triassic. Like Pappochelys, Odontochelys lacked several features found in turtles, including a carapace (the characteristic shell of turtles), though Odontochelys did have a plastron (the flat, bottom shell found on turtles). Variations on a theme are common in evolutionary history.) Bony antecedent turtle-like shells would have been preserved in the fossil record if they had existed. This strongly suggests a body plan of saltational suddenness, and a quite decent design, as the basics of turtles have little changed since.

Turtles have the unique ability to quickly extend or retract their heads. This was long thought to have evolved solely for defense, but it emerged as a way to spring the head forward to snatch prey. Turtles sometimes act as ambush hunters, using their shell as a blind.

The other turtle group – pleurodires – bend muscles horizontally to pull their neck back to the side and tuck it next to their shoulder. Pleurodires are freshwater turtles found in Africa, South America, and Australia. They include snake-necked turtles and the peculiar matamata.