There have been many mass extinction events on Earth. (By convention, extinction events terminate a labeled geological period, age, or epoch.) 10 have been especially catastrophic: where most of the existing diversity succumbed. (Conventional accounting tallies only 5 major extinction events. In 2015, American biologists Peter Ward and Joe Kirschvink cited 10 such massive extinctions (omitting only the Botomian event).) Another such horrific extinction event is presently gaining momentum.

5. Cambrian (period) (488 MYA) (W–K): many weird wonders lose their lease on life, including the first flush of trilobites, in an extinction event called the Dead Interval.

9. Triassic (period) (201 MYA): life on land and in the oceans takes a major hit from volcanic climate change.

The chronicle of mass extinction events is incomplete. New discoveries keep being made of extinction pulses which profoundly affected life. 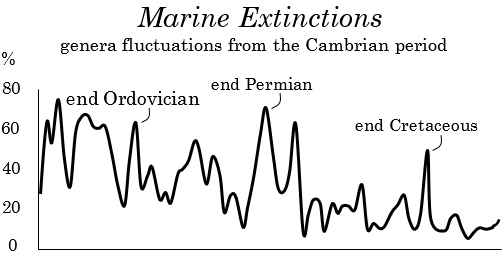 Beginning 455 MYA, the mass extinction event ending the Ordovician (485–443 MYA) was incited by 2 glaciations with global impact separated by a million years. The 1st glaciation came on the heels of an extraordinarily warm world during the early and middle Ordovician; this despite the Sun basking Earth with 5% less radiation than today.

There must have been a 10% greater concentration of greenhouse gases for such warmth. How that came about, whether by volcanism or a different carbon cycle, is not known. An elevated level of greenhouse gas during hothouse meant low atmospheric oxygen levels: something which organisms had adapted to by the Late Ordovician.

The toll of the Ordovician–Silurian extinction event was: 12% of marine families, encompassing 96% of marine species, at a time when most macroscopic life lived in the seas. More than 60% of marine invertebrates died. In terms of diversity loss, this was the 3rd-worst extinction in the history of life.

During the Ordovician Gondwana shifted south, into the polar region. This, along with the freshening impact of plants’ arrival on land, led to global cooling. The cooling initially delivered anoxic (low oxygen) bottom waters, especially beneath regions of high sea productivity, such as those zones fed by nutrient-upwelling currents. This anoxia accelerated extinction.

The onset of glaciation altered the carbon cycle, with the atmospheric oxygen level rising. This was after much extinction had already transpired.

After the 1st glaciation, the planet reeled from frigid icehouse to hothouse in a half-million years. A strong thermocline developed, returning the deep ocean to its anoxic state.

Sea levels rose rapidly, blanketing shallow marine habitats with anoxic waters. The benthic faunas on the continental margins that had managed to survive the freeze succumbed from the warming.

The species that survived tended to be small and simple. Reducing body size shortens the time to reproductive maturity. This evolutionary strategy provides more opportunities for adaptation from one generation to the next.

Extinction events are gauged by diversity loss, not population decline. The toll is measured in disappearance from the fossil record, not deaths, which are uncountable.

Ecological generalists – species with considerable tolerances to environmental changes – are the most successful migrants into new habitats. When invaded, generalists hang tougher than specialists, which are well-adapted to their niche but lack robustness in challenging times.

Specialists make the most of their habitat. Generalists fare better during rapid environmental changes, but there are fewer species of them. Owing to their inherent adaptability, generalists are less prone to speciation.

Oceanic reefs teemed with life during the Devonian (416–359 MYA). Various carbonate-secreting organisms coalesced into communities that built cities on the ocean floor which served all sorts of sea creatures.

Extinction at the end of the Devonian came as a rampant reign of invasive species in the oceans catapulted into catastrophe. The world’s watery realm was hard hit: loss of 95% of shallow-water species, 60% extinction of deep-water species, and 22% of all marine animal families lost.

Ocean life at the end of the Devonian declined because opportunities for new diversity did not exist. In a death spiral that lasted 10 million years (374–364 MYA), what invasive species started was finished off by environmental changes, as oceanic oxygen levels plunged.

Jawed fish fared fairly well, especially considering the devastation of the reefs; but then, these predators may well have been the invaders that were the extinction initiators. While their populations eventually plummeted, these generalists survived and thrived through coming eras.

Life on land suffered a more modest decline at the Devonian–Carboniferous boundary, owing to tectonic activity and climate changes. The tumult was not only of species dying out but also a failure of new ones to form. Diversity plunged as opportunities for new life declined.

The worst extinction event of all time was 252–248 MYA, at the end of the Permian. The Paleozoic era closed with  an extinction event that drove life’s diversity on land down to 5 to 10% of what it had been. At least 90% of terrestrial species and over 50% of marine families were wiped out during the Great Dying.

The multiple-pulse Triassic–Jurassic extinction event 217–199 MYA profoundly affected life on land and in the oceans. Most large amphibian species vanished. 20% of all marine families went extinct. Plant biodiversity was not severely affected, as plants adapted, though there was considerable species turnover in the mix of vegetation.

Global warming had an impact but does not explain the sudden demise of marine life during the Triassic–Jurassic mass extinction. No massive meteorite craters that can be considered causal have been found. Some evidence indicates voluminous volcanic eruptions at the time, though conclusions to causes are still speculative.

The last great extinction event, at the Cretaceous–Paleogene (K–Pg) boundary, 66 MYA, set the stage for the large life forms found today. There was an 80% elimination in marine invertebrates, a drastic drop in mammal species, and the utter demise of dinosaurs, save the birds that soar to this day. All told, 60–80% of all animal species were snuffed. The only marsupial to make it were opossums. Plants were profoundly affected by the abrupt changes caused by a bodacious bolide bashing into the Yucatán peninsula.

There have been numerous minor extinction events: minor only by comparison to those that were devastating. The disruptions to life in the lesser extinction pulses were dramatic, though not nearly as drastic as the vast numbers lost in major events. As an example: 183 MYA, a relatively minor mass extinction – the Early Toarcian oceanic anoxic event – wiped out more than 80% of the marine bivalve species, such as clams. Many shallow-water species went extinct. Oceanic methane release from tectonic plate movement was the probable cause.