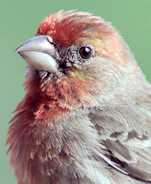 The house finch is a small songbird, once endemic to western North America, ranging latitudinally from southern Oregon to Oaxaca, Mexico, and as far east as southwest Wyoming. Then humans inadvertently decided the little birds deserved a broader range.

In the 1850s, a small number of house finches from coastal California were introduced to Oahu. By the turn of the 20th century, house finches were abundant throughout the Hawaiian Islands.

In the 1930s, to avoid prosecution for illegally selling birds, pet store owners released ~100 house finches in New York City. By 1995, they had spread across the eastern US and southeastern Canada.

This geographical expansion was accompanied by rapid divergence. In some instances, new populations differed in various traits, such as sexual dimorphism, by up to 2 standard deviations from the mean in less than 10 generations.

This wide radiation can only be accounted for by female mating selection and breeding success which reflects maternal care quality. Female mating preferences and mothering behaviors brought forth the great diversity of house finches during the 70 years that were the fastest dispersal of birds in modern times.