The environmental pressures presented by humans has forced animals into desperation. Wolves have been hard put from deforestation and deliberate persecution by man.

Within the past few decades, a scarcity of sex partners led wolves to mate with coyotes and dogs. If they survive at all, such interbreeding usually leads to offspring less robust than either parent. The coywolf combination is an exception. 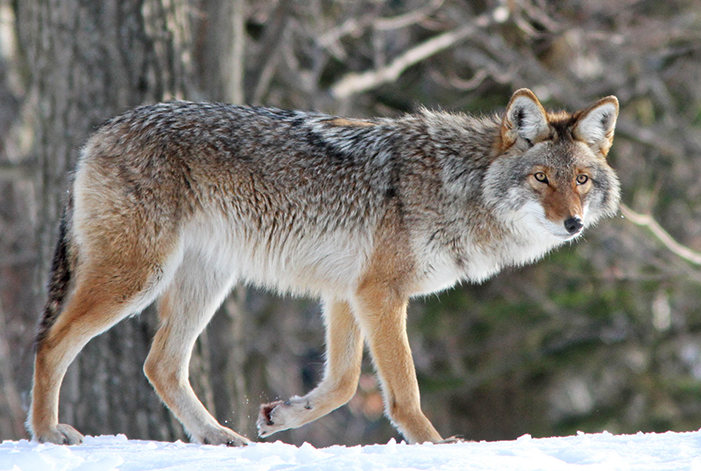 Coywolf DNA is mostly coyote, with 25% wolf and 10% dog (mostly large breeds, such as Doberman Pinschers and German Shepherds). The result: remarkable adaptation.

Coyotes disdain hunting in forests. Wolves prefer it. Interbreeding has produced an animal skilled at predation in both open terrain and densely wooded areas.

At 25 kg or more, many coywolves have twice the heft of coyotes. With larger jaws, more muscle, and faster legs, coywolves can take down small deer solo. A pack can even kill a moose.

Since the 21st century dawned, coywolves’ range has come to encompass America’s entire northeast, urban areas included. They are continuing to expand in the southeast, following coywolves’ arrival there half a century ago.

This is astonishing. Coyotes never managed to establish themselves east of the prairies. Wolves were killed off in eastern forests long ago. But coywolves have been able to spread into a vast and otherwise uninhabitable territory.

Indeed, coywolves are now living even in large cities, including Boston, New York, and Washington. This adaptability to urban life owes to greater tolerance of people and noise. Wolves dislike humans.

Coywolves consume pumpkins, watermelons, and other garden produce as well as discarded food. They snack on rodents and other smallish mammals.

Parks and lawns are usually kept clear of thick underbrush, so catching squirrels and pets is easy. Cats are commonly eaten skull and all.

Thanks to this bounty, an urban coywolf needs only half of the territory it would require residing in the countryside. Getting into town is easy: railways provide corridors that make the trip easy.

Surviving in the city requires keeping a low profile. Coywolves have adjusted by becoming nocturnal. They have also learned to watch out for cars, looking both ways before crossing a road.

Even coywolf cries blend those of their ancestors. The 1st part of a howl has a deep pitch like that of a wolf, but this then turns into a higher-pitched, coyote-like yipping.

Coywolves illustrate that species is a contrived concept. Evolution is not the simple branching that textbooks might lead one to believe.

But then, humans also illustrate such hybridization, in modern Europeans carrying Neanderthal genes, and east Asians have Denisovans in their DNA. Whereas plants are judicious, animals breed with what they can.