The degree and quickness with which they evolved was surprising. ~ Yoel Stuart 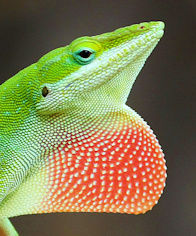 The green anole is a smallish arboreal lizard common in the southeastern United States and some Caribbean islands.

Though not a chameleon, the green anole can change color: from various brown hues to bright green. The ability to change colors is common to anoles, which are iguanas.

The brown anole is a cousin to the green, native to Cuba and the Bahamas. It has a highly invasive species, helped along by humans who kept them as pets and carelessly let them into the domain of the green anole, who cannot compete against the brown anole.

Within 15 years and 20 generations, green anoles in south Florida adapted to invasion of the browns by growing larger sticky toe pads, allowing them perch higher up the branches of trees where they and their hatchlings are safer.