Not all ‘islands’ need to be surrounded by water. Climatic changes can lead to the constriction or dissection of terrestrial environments producing isolated, spatially restricted refuges. Refuges can produce the same geographic isolation of organisms as islands. ~ Catherine Forster 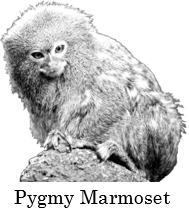 The New World callitrichid monkeys, which include tamarins and marmosets, are phyletic midgets. Arid conditions during the Neogene and early Quaternary periods likely reduced and isolated forest regions into small refugia, limiting resources and adaptively pushing callitrichids toward dwarfism.

The remarkable diversity of birds in Amazonia may have transpired similarly. The zones of high avian radiation were concentrated in areas over 100 meters in elevation. In the Neogene and early Quaternary periods, sea level rises from marine transgressions may have divided the Amazon basin into numerous islands and archipelagoes, engendering allopatric (isolation) speciation and diversification of bird faunas within each refuge.

Ocean basins and lakes may also become isolated, affecting biotic evolution in an island-like manner. The 3 genetically distinct groups of cichlids in Lake Tanganyika likely arose during the Pleistocene, when the water level dropped, and the lake split into 3.

The explosive radiations of animals during the early Cambrian may be explained by island-like isolations. The supercontinent Rodinia was fragmenting during that time, creating additional continental shelves and coastline areas which facilitated biotic evolution.