Adaptive pressures led to progressive refinements in vision equipment, though not always obvious improvements. Vertebrate eyes oddly have blood and nerve vessels coming from the front. The cephalopod eye has a more logical wiring, with the vessels from the back. 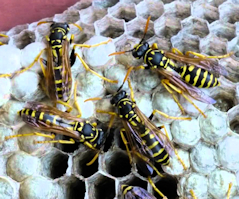 Whereas dark North American paper wasps each make their own nest, golden paper wasps form small colonies by building a joint nest where they lay their eggs.

Clustering queens squabble and determine a dominance hierarchy. A social hierarchy is only possible if individuals can recognize one another.

Many flying insects have a high-acuity zone within their compound eye, outfitted with larger diameter lenses. The lenses with heightened acuity face forward, which is the typical flight direction.

Social wasps had 2 adaptations which facilitated individual recognition: singular looks and the sight to see it.

Stiff exoskeletons do not afford facial expressions but patterns on the face allow an individual look. Social wasps all have distinctive faces.

Whereas large wasps tend to be solitary, smaller ones socialize. Smaller social wasp eyes are proportionately large, delivering sight just as good as their bigger cousins. Those with variable facial patterns have larger lenses in their acute zone than those that do not have variable faces.

As they live within a social hierarchy, social paper wasps can infer rank by watching how other wasps behave around each other: an acumen called transitive inference. Honeybees, with equivalent brains, do not posses this skill; but then, they don’t need to, as they don’t have a social hierarchy.

Wasps use known relationships to make inferences about unknown relationships. The capacity for complex behavior is shaped by the social environment in which behaviors are beneficial, rather than being defined by brain size. Miniature nervous systems do not limit sophisticated behaviors. ~ American evolutionary biologist Elizabeth Tibbetts