Among tarantulas, blue hair evolved independently at least 8 times. Why remains a mystery. 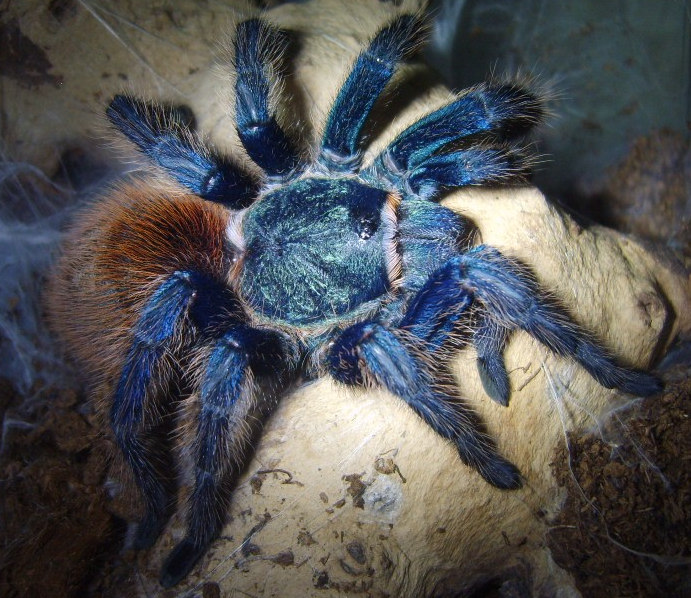 Recent research suggests that tarantulas may have color vision. If so, the blue may be a mating signal. That explanation is not wholly convincing, as these spiders are almost entirely crepuscular, if not nocturnal. But then, if tarantulas do see in color, they may be able to do so in very low light.

The blue may sufficiently resemble flower petals to lure some insects within striking distance. Blue may help hide tarantulas from predators in the green-tinted light of the forest. Or it may look enough like the color of some fierce wasps, and so give hungry predators pause before attacking.

Certainly, blue hair among tarantulas is no coincidence. All of them reflect blue light within a narrow ~10 nanometer range at the 450-nm wavelength.

The blueness comes solely from their hair. Beneath even the most eye-popping sapphire locks lies a dark, dull cuticle.

Tarantula hair blueness is produced by embedded nanoscale structures that vary widely among spiders. Some species produce an ordered phalanx of micro pancake stacks: cuticle layers alternating between thin air pockets. Others have subtle arrays of quasi-ordered spongy structures like those of bird feathers.

Structures and evolutionary histories differ, but tarantulas are “evolving the same blue over and over again,” observed American biologist Todd Blackledge.

{Note that this page has been updated since the book was published, as new information became available.}