The evolution of the giraffe is clear evidence of adaptation from a grazing to a browsing lifestyle. ~ Jon Erickson 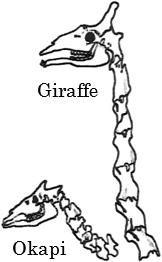 Giraffe descent began ~25 MYA. Roaming Africa and Eurasia, the progenitor of giraffes looked like an antelope.

~8 MYA, Bohlinia, the direct ancestor of giraffes, appeared in southeastern Europe. Bohlinia had an elongated neck and legs, though not nearly as long as giraffes. Driven by climate change, the progeny of Bohlinia migrated to northern India and China. There the modern long-necked giraffe evolved 7.5 MYA.

7 MYA, giraffes entered Africa. The African giraffe would become the only one of its kind, as further climatic turmoil killed off the Asian giraffes 4 MYA. African giraffes radiated into several species, of which 8 are now extant.

The giraffe now has only a single cousin: the okapi. Giraffes and okapi diverged 11.5 MYA. Okapi, giraffes, and humans all have the same number of neck bones: 7. Only giraffes undergo the peramorphosis which stretches their necks and legs.