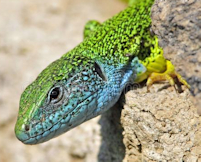 When mating season comes around, the heads of male Iberian emerald lizards turn turquoise. This honest signal of health seems a risky adaptation, as the vibrant hue might attract birds of prey from above as well as willing females below.

There is a skew to this blue. The lizard’s head is iridescent: reflecting light differently depending upon the angle from which it is seen. Iridescence is caused by microscopic structures that scatter light, rather than by pigments, which absorb and reflect certain wavelengths.

The fine layers of chitin in butterfly wings, which give them their sheen, do so through iridescence. Iridescent green in swallowtail and gossamer-winged butterflies is achieved via microscopic chitin gyroids: an intricate geometric design of oppositely congruent labyrinths which are a mathematically optimal way to fold space.

In animals, reds and yellows are commonly the result of pigments. But blues are mostly structural. In lizards, blue comes from geometric arrangements of guanine in their scales.

Structural coloration does not always result in iridescence, but it does with Iberian emerald lizards; lucky for them. Whereas females from afar catch a vivid turquoise visage, raptors above see a dull green that blends in. The specific iridescence in emerald lizards gives them what they want and need.

Nature puts iridescence to distinct purposes. For emerald lizards it abets camouflage while permitting an honest social signal. In the case of butterflies and some other animals, iridescence can create a startling shine that gives pause to potential predators. Shifting colors create confusion that hinder a predator’s ability to pinpoint location. Either effect gives glittering prey more time to escape.