In the game of life an animal stakes its offspring against a capricious environment. The game is won if offspring live to play another round. What is an appropriate tactical strategy for winning this game? How many offspring are needed? At what age should they be born? Should they be born in one large batch or spread out over a long lifespan? Should the offspring in a particular batch be few and tough or many and flimsy? Should parents lavish care on their offspring? Should parents lavish care on themselves to survive and breed again? Should the young grow up as a family, or should they be broadcast over the landscape at an early age to seek their fortunes independently? ~ American paleobiologist & ecologist Henry Horn

A surfeit of strategic survival trade-offs exists for animals. A logical place to start is how life begins.

Oysters produce millions of offspring in a lifetime, providing no parental attention. Conversely, elephants produce very few offspring, each singly born, each the object of intense and prolonged parental care. 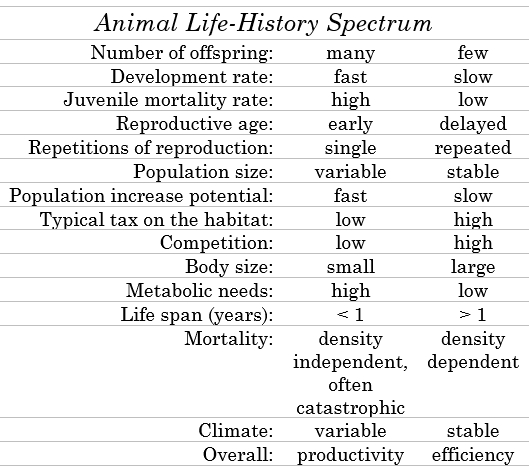 The statistical tails of the animal life-histories spectrum may be characterized by how prodigiously a female creates progeny: many or few. The adapted traits which sum to a reproductive survival strategy are numerous, with more biological features interrelated than may be immediately apparent.

Mouse lemurs are the smallest primate, gorillas the largest. An 80-gram adult female lemur may produce each year 1 or 2 litters of 2 to 3 offspring per litter. Lemurs become reproductive within a year.

A 93-kilogram adult female gorilla produces a single offspring every 4 or 5 years. Gorillas do not reach reproductive age for a decade.

Mathematically at least, a female mouse lemur can leave 10 million descendants by the time it takes a female gorilla

to procreate a single offspring. Mouse lemurs may live to 15 years; gorillas 50.

Greenland sharks may live 500 years: the longest lifespan of any vertebrate. The largest of extant sharks, Greenland sharks swim leisurely, grow just 1 cm a year, and females (which are typically larger than males) may not reach sexual maturity until they are 156 years old.

While losing out on reproductive numbers, size has its compensations. Larger prey commonly have better antipredator defenses, while large carnivores may have a wider choice of prey.

On a per weight basis, larger animals require less food, and so can subsist on lower-quality fare. Mouse lemurs must feed on energy-rich insects, while gorillas can get by on energy-poor foliage. One might think that larger animals require more sustenance, but the gating factors are generally metabolic rate and various efficiencies, not size per se.

Size can be a limiting advantage. Because they have longer legs, bigger animals can typically run faster than smaller ones. This only works up to a point. In a family of animals, the fastest is midsized. Above a certain size, body mass requires a change of stride. Size imposes biomechanical constraints.

The adaptive response to increasing mortality is downsizing, which also occurs when environmental conditions are in flux. In the early 21st century many animals were having smaller offspring in reaction to rapid climate change.