Neoteny in the genitals is seen by lack of a penis bone (baculum) in males, and in females a forward-facing vagina and the presence of a hymen. 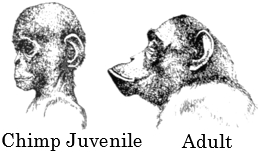 Female faces that are more neotenized are most alluring to men, while less neoteny is the least attractive, regardless of age. As women choose a mate largely on concerns other than physicality, neoteny is not as looming an issue in male attractiveness.

Neoteny has been seen in several animal species. It typically results in larger individuals with longer lifespans, as it has with humans. There is a notable exception: birds. Avian evolution included downsizing, partly attained by sticking with the skeletal structure of the young dinosaurs birds descended from.

Neoteny in animals is often indicative of a change in the vector of evolutionary descent. This was the case with salamanders, birds, and humans. Chordates arose over a half-million years ago via neoteny.

Another association with neoteny is a transformation of sociality. Animal domestication has repeatedly resulted in neoteny, as dogs illustrate. Hominin neoteny likely reflected a shift toward comity. 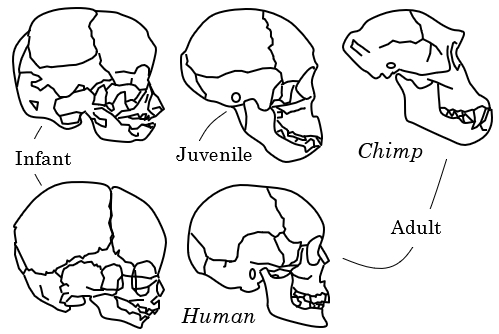