Even a partial skull fragment can indicate cranial capacity. The question then becomes what to make of relative brain size. It was long thought that brain size was adaptive to cognitive faculty; specifically, sophistication in sociality: more complex social relations spelled a larger brain. Nonsense. With their tiny bird brains, corvids have comparable social complexities, better problem-solving faculties, and superior memory capability than humans.

Woodpeckers live in stable social groups and deal with the politics of social living: competition, manipulation, and deception. The relative brain size of these woodpeckers is significantly smaller than other, less-sociable birds.

The simple fact is that evolutionary biologists do not know why brain size varies in primates. Body and brain size are only roughly related. One study found a much tighter correlation between diet and brain size than any measure of sociality, and that fruit eaters had the biggest brains.

Correlating overall brain size and cognition is pointless, since an increase in brain size will not lead to higher intelligence. ~ German paleontologist Marc Srour

Speculation based upon statistics may be intriguing, but there is no evidence that brain size has anything to do with cognitive faculty. Statistical analyses of modern humans show no correlation between brain size and mental abilities. Little women may be brainier than big brawny men. 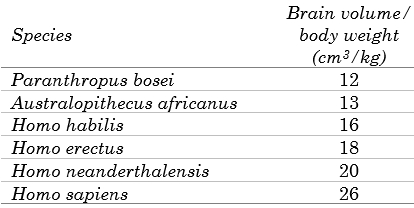 1/3rd of the human brain is dedicated to vision. Yet flying insects, with minuscule brains and meager neural connections between the eyes and brain, have much better sight.

One thing the brain is certainly good for is eating energy. The human brain accounts for only 2–3% of body weight, but guzzles 25% of the body’s energy when at rest. By comparison, other apes require only 8% of resting energy.

What is known is that the brain is a physiological showpiece, with activity that is coincidental with mentation, not causal nor even correlative. Organisms without brains are known to have impressive cognitive abilities. The mind-body complex manifests from an energetic gyre: an entangled intricacy barely understood and utterly ignored by the matterists who foolishly believe that the brain conjures the mind.

The brain is not an organ of thinking but an organ of survival, like claws and fangs. ~ Hungarian physiologist Albert Szent-Györgyi