Global temperatures over the past 6 million years are known by measuring chemical signatures in the shells of fossilized benthic microorganisms. These changes are due in part to Milankovitch cycles: fluctuations in Earth’s orbit, axis of rotation, and proximity to the Sun. Otherwise climate is a gyre with multiple feedback loops that unwind through time.

It was long thought that both evolution and climate change had glacial time frames, on the order of 10,000 years – wrong on both counts. At times, major shifts from one climatic mode to another have occurred in 10 years. 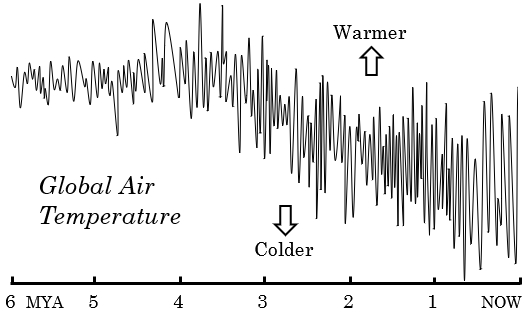 The prelude to human emergence was the Oligocene (34–23 MYA), a relatively warm epoch to start but cooling in the close. During the Oligocene came further evolution of flowering plants, including the culmination of coevolution between plants and pollinating animals. The epoch also saw the rapid evolution of and diversification of animals, especially mammals.

The Miocene and epochs to follow witnessed dramatically changing climates, punctuated by ice ages. The Himalayas started their ascent at the end of the Miocene (7–6 MYA), as did a sudden expansion of grasslands globally. Forests fell victim to a generally cooler and drier climate. This continued in the Pliocene (5.33–2.588 MYA), as well as more seasonal weather, similar to the modern climate (before manmade pollution jumped into the climate driver’s seat).

The continents continued to drift. Most tellingly, South America became linked to North America during the Pliocene. This resulted in a cutoff of the warm equatorial ocean currents, thus beginning an Atlantic cooling cycle that rendered the Arctic and Antarctic waters frigid. Water locked up in ice caps created a short-lived land bridge between Asia and Alaska: Beringia. This passage led to animal migrations to the Americas from Asia. The first humans had already come before the land corridor formed, making their way on the water, their sea craft hugging close to the coast.