Though continental configuration looms large in climatic inclinations, as does biotic influence, Earth has a tendency toward icehouse, as it orbits on the cool side of the planetary habitable zone. (This zone is more formally known as the circumstellar habitable zone, and less formally as the Goldilocks zone. Astronomers sometimes call this ambient range amenable to life the comfort zone, as if it were a cozy stellar sofa for lounging life.)

By the Pleistocene (2.588–0.0117 MYA) the plates upon which the modern continents sit were fairly settled into place. But the climate was not.

Continuing a trend set in the late Pliocene, the Pleistocene was a time of repeated glacial cycles with global impact. Advances of ice depopulated large areas of continents as plants and animals migrated. Climate swings went from a largely ice-free world to almost 1/3rd of the planet’s surface sheeted in ice.

During the early Pleistocene, ~2 MYA, the glacial-interglacial cycle was ~40,000 years. 1 MYA this duration lengthened to ~100,000 years. Though Milankovitch cycling was still in play, the reasons for the climate-cycle stretch are not well understood. 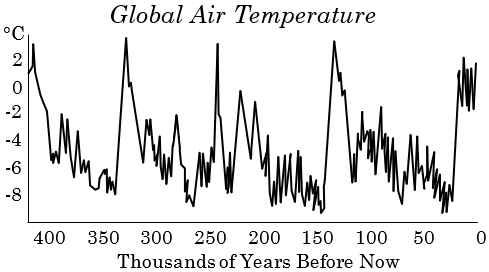 Despite rapid extreme climate pulses, the average rates of extinction until approaching the close of Pleistocene were less than 2% – one of the lowest for any epoch. Life had largely acclimatized to fickle climate.