To many persons the conclusion that man is the naturally modified descendant of apelike ancestors appears to be destructive of the belief in an immortal soul, and in the teachings of Christianity; and accordingly, they either reject Darwinism altogether, or claim for man a special exemption from the mode of origin admitted for other animals. ~ Ray Lankester in 1880

Though the advent of modern humans happened only a few hundreds of thousands of years ago, their descent has a very long history. Homo sapiens is but one leaf of many branches on the tree of primates; a tree with roots dating at least 65 million years, and with the leaves of over 1,000 species from then to now.

Untangling some confusing terminology is merited before proceeding. The 18th-century Linnaeus system of primate taxonomy held to the 1980s. This earlier classification had hominoid subfamilies of hominids (eventuating into humans) and anthropoids (monkeys and apes).

Recent genetic studies put humans, gorillas, and chimps closer to one another than orangutans. So, hominoids were bifurcated into subfamilies: Ponginae (orangutans) and Homininae (humans, gorillas, and chimps (including bonobos)). The Homininae subfamily is further broken down to Hominini (the evolutionary line which led to humans), Panini (chimps), and Gorillini (gorillas).

Hominin refers to the proximate clade descending to humans. A hominid is an ape descendant, some of which became hominin: contributors to the human genome.

Over 3 dozen hominid species have lived, depending upon judgmental accounting for speciation. Many overlapped in time. New species keep being discovered. 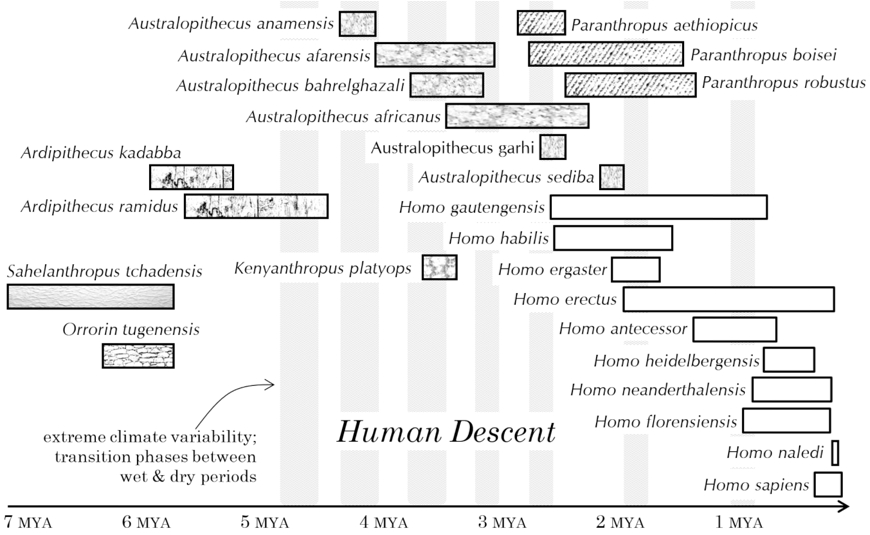 Now only 1 human species is named: Homo sapiens. This supposed singularity comes despite numerous races and sociological barriers to interbreeding; a fact which, by any decent biologist’s definition, comprises a world populated today by numerous Homo subspecies. 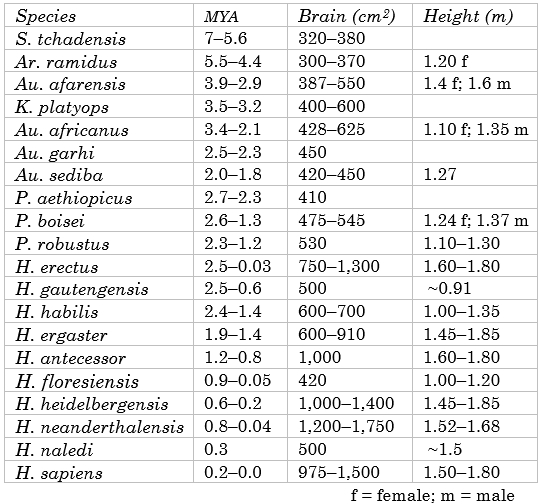 Why, then, has evolutionary fate treated ape and man so differently? The one has been left in the obscurity of its native jungle, while the other has been given a glorious exodus leading to the domination of earth, sea, and sky. ~ American paleontologist Henry Osborn

Traditionally, the story of human evolution has cited 4 milestones: terrestriality (from being in the trees to living on the ground); bipedality (walking upright); encephalization (brain expansion relative to body size); and culture (civilization). For a long time, debate about human descent centered on the primacy of milestone: which came first, leading to the other facets. This shallow discourse ignored that none of the traits are unique to humans. Above all, the one thing taken for granted as unquestionable truth was the superiority of man.

Man differs conspicuously from all the other primates in being almost naked. But a few short straggling hairs are found over the greater part of the body in the man, and fine down on that of the woman. ~ Charles Darwin in The Descent of Man

In The Descent of Man (1871) (women merely being along for the ride with their “fine down”) Darwin identified intelligence, manual dexterity, bipedality, and technology as making humans special; further arguing that any ape with even modest endowment of these traits would surely yield a competitive edge over other apes.

According to Darwin, once a hominin emerged with these qualities, competitive natural selection rendered Homo sapiens inevitable. This seductive but sophistic formula held sway among most paleontologists until quite recently and remains the preponderant account among the populace who ponder such. What happened is more mosaic. The path to modern humans owes to several circumstances and coincidences, and remains uncertain in many regards.

That humans descended from apes is likewise not long held. Even in the 1960s the predominant theme in the story of human evolution was that humans diverged from early ape stock, not directly from more-evolved primates. Modern apes and humans were considered an example of parallel evolution. Today’s great apes were conjectured closely related by lineage, whereas humanity was a long-standing clade, with the progenitor originating in the far-distant past.

Species names should be banned as end points in cladograms. Cladograms do not document evolutionary changes in whole animals or species. Instead, they document only changes in the character (usually few) under consideration. ~ American anthropologist Glenn Conroy

From the 1940s into the 1970s the accumulating pile of hominid fossils and stone tools shifted the story. Culture, centered on the butchery of animals with stone tools, became the dominant theme that begat the path of hunter-gatherer to concrete-and-glass entombed office worker.

To tidy the tale, in the 1960s a couple of American paleoanthropologists promulgated what became popular in passing – the single-species hypothesis: that only 1 species of hominin existed at any one time. (Loring Brace & Milford Wolpoff were proponents for human single-species descent.) In step with orthogenesis, human history was supposed a linear lineage of steady steps up the evolutionary ladder.

The rationale behind single-species descent was a rigged rule of ecology: competitive exclusion, which posits that 2 species with selfsame adaptations cannot coexist. Darwin surely would have approved.

Under the single-species silliness culture was a powerful evolutionary push. The notion that multiple cultural species could thrive side by side was inconceivable. Hence, because all hominins are by definition cultural, only 1 hominin species could exist at a time. Once that loop is closed, circular logic looks like a speedway of rationalized rectitude. Using assumption as a crutch, such is inference at its worst.

The single-species myth was shuttered in the mid-1970s. Fossil discoveries in Kenya undisputedly demonstrated coexistence of 2 dramatically different hominids: Homo erectus, an ancestor to Homo sapiens, and Australopithecus boisei, a hominid destined for the extinction dustbin.

This disruption in presumption knocked culture off its pedestal of predominance. In its place arose the concept that some aberrant African ape adopted a decidedly un-apelike lifestyle, evolving from there.

Once one gets over the sophistry that humans are inherently superior, the heritage of the hominid lineage falls into the realm of behavioral ecology, with issues by no means unique from the rest of animate Nature. In this proper view, the origins of human descent are entirely within the context of primate biology.

Human beings are special in many ways – of course we are – but so is every other species. ~ English paleontologist and evolutionary biologist Henry Gee

None of the physiological traits that supposedly typify the human body are novel. Let’s look at a few prominent features.