Ancient Russians created an enormous geoglyph of a moose in the Ural Mountains 6,000 years ago. The moose is 275 meters long and up to 10 meters wide, formed by digging ditches and filling them with stones.

The Uffington White Horse (shown below) is a stylized running horse 105 meters long, created by carving through turf to reveal the white chalk underneath. The horse was created 3,000 years ago. 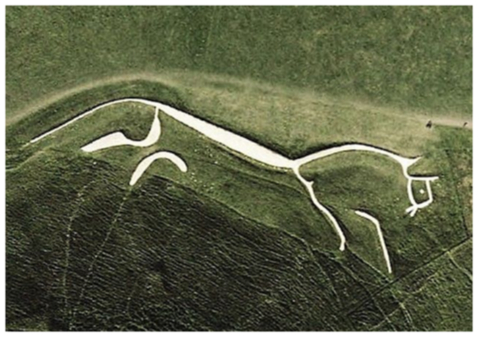 The Paracas Candelabra (shown below) was created on the side of a mountain at Pisco Bay, Peru in 200 BCE. The 200-meter-high design is cut 0.6 meters into hard soil, with stones around it. The representation is likely a lightning-rod trident belonging to the creator god Viracocha, known throughout South America in ancient mythologies. 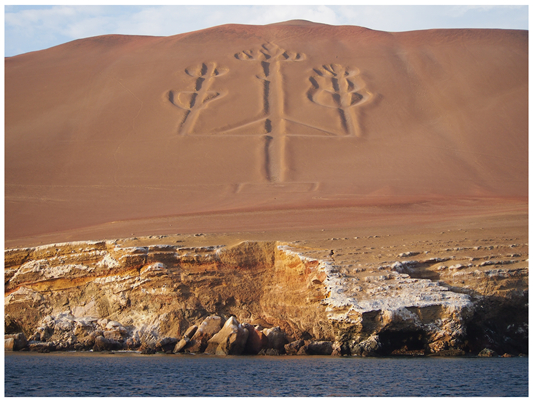 The Nazca Lines in Peru were scratched in the desert beginning 2,000 years ago. There are over 800 straight lines running up to 48 kilometers, 300 geometric figures, and 70 biomorphs (animal and plant designs). One figure is a huge monkey with a spiral tail. The drawings were made by removing rocks and earth to create a negative image (as with the Uffington horse). 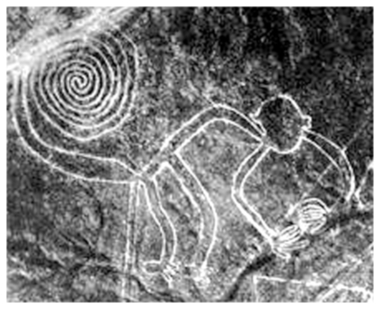 Geoglyphs are only appreciable from on high. Many can be seen from space. The engineering and effort involved in these ancient geoglyphs suggests deep cultural significance.

The conventional guesses about geoglyphs is that their construction relates to religious rituals. A more radical hypothesis, dating to the 1960s (naturally), is that some were intended as billboards to extraterrestrials.