The thrust of evolution has always been staying alive. For heterotrophs, the first priority is obtaining and processing nutrients; thus evolved systems for motility, foraging, digestion, and control of these and attendant processes.

In optimizing efficacy and evolving to take advantage of local food sources, multicellularity begat complexity as well as diversity. Physical complexity evolved incrementally, with many innovations that might later be abandoned, as a different approach was better suited to the current environment. Energy efficiency, which is its own advantage, often lessens complexity, even as such efficiency is the epitome of intricacy. It is illimitably harder to attribute sophistication than complexity, and so this apter metric of evolutionary quality has not been attempted. 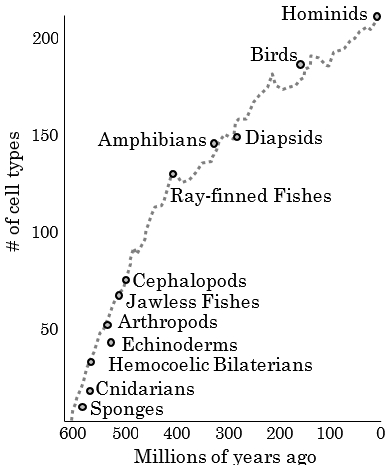 Unless one considers complexity as an accounting exercise, the issue of intricacy is not as simple as moving parts. One may look at material bits and their linkages and conjecture complexity. Appearances are often deceptive, and complexity is exemplary.

As life is defined by energy and information flows, biomechanics misses the critical picture. Every organism is a confluence of matter, energy, and mind. It is impossible to say that the richness or sophistication of our lives is greater than that of microbes, even as the nominal cell count is 10+ trillion to 1.

A crucial factor compelling physical complexity is the sheer challenge of staying alive in a hostile world, where one may readily succumb to predation, including pathogens. The bigger you are, the bigger target you become. Compensation by complication is not the same as sophistication.

Skeletons are quite costly to produce. It’s very difficult to come up with a reason other than defence for why an animal would bother to create a skeleton for itself. ~ English paleobiologist Rachel Wood