With the transition to an agricultural lifestyle (from a dependence on many species to dependence on a few), life expectancies tended to decrease rather than increase. The new agricultural diets were coupled with social hierarchies and haves and have-nots, so that even when there was enough food, not everyone received it. ~ Rob Dunn

Herding animals preceded growing crops. Animal husbandry was accepted by beefy ungulates tolerant of human proximity and inclined to an easy life. Poultry took to domestication for nothing more than chicken feed. Experiments in plant cultivation began in the Levant over 23 TYA.

Much of North America, northern Europe, and Asia was covered by ice sheets 20 TYA. By 15 TYA they had receded, bringing warmer and wetter conditions. The sea rose as ice melted. People began to repopulate previously inhospitable places.

In Western Europe the herds of reindeer and other ungulates that had supported many hunting bands moved north as glaciation relented. Some tribes followed them, while others worked out different subsistence strategies by stressing local plants, smaller game, and fish.

People had never left the Fertile Crescent, which runs from the upper Nile River in Egypt through the Middle East to the Persian Gulf, including the regions of Mesopotamia and the Levant. People settled in villages there well before agriculture took hold, living off local flora and fauna.

The Younger Dryas stadial that began ~12.8 TYA was an abrupt climatic reversal in North Africa and the Fertile Crescent. The forests and woodlands that had reclaimed some of the land dwindled. Small stands of wild grasses and other seed foods became a valuable food source. Early agriculture was a survival strategy against bitter elements which would eventually relent. Drier weather drove people to better-watered locations.

Human societies did not set out to invent agriculture and produce permanent settlements. Instead a series of marginal changes were made gradually in existing ways of obtaining food as a result of particular local circumstances. The cumulative effect of the various alterations acted like a ratchet. Changes in subsistence methods often allowed a larger population to be supported, but this made it difficult, and eventually impossible, to return to a gathering and hunting way of life because the extra people could not then be fed. ~ Clive Ponting

Even before grain crops were grown flattened breads were made from a variety of starchy sources, including the roots of cattails and ferns, which were pounded into flour and baked.

Before the stadial ended, Fertile Crescent dwellers were cultivating figs, grains, and legumes. Plant domestication began with selection: undesirable seeds by their look or taste were discarded. 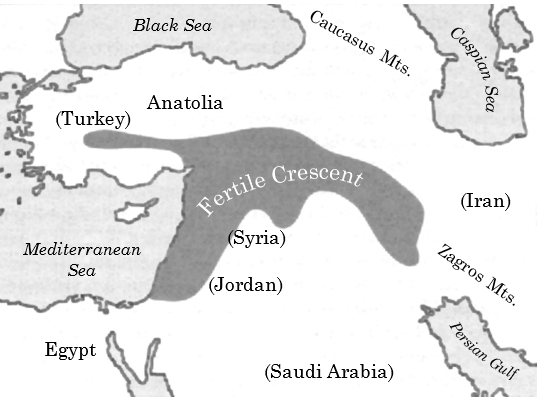 One advantage of the Fertile Crescent is that it lies within a Mediterranean climate zone: mild, wet winters and long, hot, dry summers. Plants there adapted to survive the long dry season and grow rapidly when the rains return. The lifestyles of many Fertile Crescent plants, especially cereals and pulses, made them useful to humans: annuals which produce large energy-packed seeds.

A 2nd advantage of the Fertile Crescent was that the wild ancestors of many later crops were already abundant and highly productive: occurring in large stands easily harvested.

A 3rd advantage was that these plants were self-pollinating (hermaphrodites) or were easily propagated vegetatively. Such plant reproductive strategies made these florae especially easy for humans to cultivate. The early crops grown in the Fertile Crescent were all hermaphrodites.

A 4th advantage of the Fertile Crescent was it had a wide range of altitudes, microclimates, and microbiomes. This meant staggered harvest seasons and a diversity in both plants and animals.

Crop cultivation was a response to overexploitation of local resources by a growing population. The Fertile Crescent had few large rivers and only a short coastline, providing meager aquatic food resources. Huge herds of one of the most important animals hunted for meat – the gazelle – were slaughtered down to small numbers.

The first domesticated plants in the Fertile Crescent – the so-called Neolithic founder crops – were flax, 3 cereals (barley, emmer, and einkorn wheat), and 4 pulses (lentil, bitter vetch, pea, and chickpea). The choice of grains to cultivate owed somewhat to climate change. Carbon dioxide levels were high following the Younger Dryas, as large deposits of CO2 were released from the oceans when current circulation patterns changed with ice-sheet melting.

All plants grow larger with a higher CO2 but some are more sensitive. Among those are wheat and barley, which grew twice as large and produced double the seeds. That secured their place in the field after the last ice age.

From ~12 TYA, when world population may have been around 2 or 3 million, people began domesticating crops and animals. This occurred independently, at distinct times, in 6 separate locales worldwide. The development of agriculture during this time is termed the Neolithic Revolution.

(Neolithic agriculture after the Younger Dryas was a revival of earlier practice in the Fertile Crescent. Crops were cultivated there at least 23,000 years ago.)

Sedentism long proceeded plant and animal domestication, and it was at least 4 millennia after farming began that villages appeared. The appearance of towns was usually the result of wetland abundance.

The general problem with farming – especially plough agriculture – is that it involves so much intensive labor. ~ American anthropologist James Scott

Agriculture furthered settlements. These promoted technological innovations. One of the most important was the development of heavy-duty axes. The ability to fell forests for fields and grazing lands, and work wood, was critical for engendering burgeoning human populations. It also abruptly changed the environment for other animals and plants.

Sophisticated granaries were built early on: circular buildings with internal stone supports for raised floors. This allowed air circulation, thereby reducing the risk of fungal spoilage, and provided some protection from rodents.

Some early cultivation efforts failed. Rye domestication in Anatolia was abandoned. Rye seeds made their way to other parts of Europe as weeds, and were successfully domesticated there, thousands of years after the earliest agricultural attempt.

Plant domestication involves adaptation by plants to living in a human-managed habitat. Some plants resist.

Very long-term natural processes lead to domestication – putting us on a par with the natural world, where we have species like ants that have domesticated fungi. ~ English biologist Robin Allaby

Trade carried both goods and technology; thus began what would become Sumer and other early civilizations.

The first states were fragile. Wars, drought, disease, and the crushing demands of a rising elite made farming a risky, hardscrabble lifestyle. From 1800 to 750 bce settlements in Mesopotamia shrank by over 75%. Warfare-borne disease, deforestation, and salinization of the soil contributed to this decline.

The onset of agriculture did not obviate hunting and foraging as a lifestyle, at least in Europe. 8,500 years ago Europeans were hunter-gathers: not much different in foraging from their ancestors for millions of years. Immigrants from the east brought agricultural knowledge into Europe. Farmers and foragers coexisted for over 2 millennia before agriculture became dominant ~5,000 years ago. Since then, humans have domesticated over 260 different plants, 470 animals, and 100 mushrooms.