Crete is the largest Greek island, first settled 128 TYA. By 7000 bce agriculture had appeared. The first known settlement was at Knossos around 6000 bce. Knossos farmers lived in rectangular, sunbaked, mud huts which had storage bins and sleeping platforms.

The Aegean Sea opens into the Mediterranean Sea, with Crete in the middle of the thoroughfare. That made the island a natural port for regional trade, which in turn fostered prosperity. 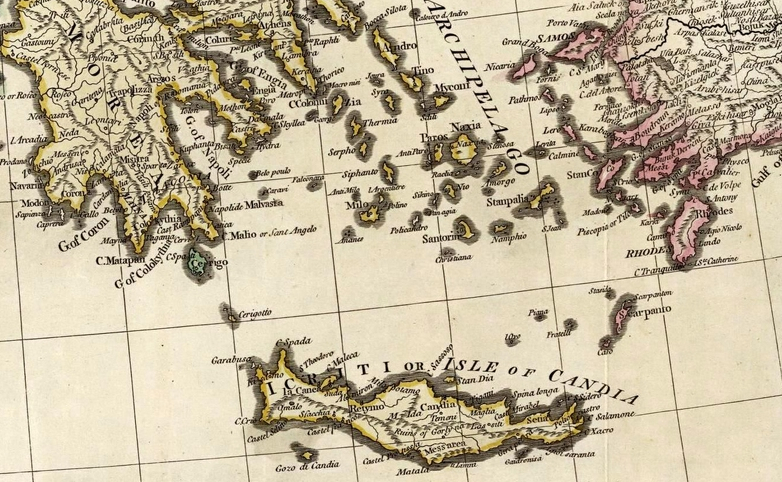 Crete was settled by immigrant farmers from mainland Europe in 4400 BCE. Trade was burgeoning by 3730 BCE.

The earliest civilization built on Crete was belatedly termed Minoan by English archeologist Arthur Evans, who unearthed the palace at Knossos on the north coast. Evans coined Minoan after Minos, the mythic king of Crete who ended up judging the dead in the underworld.

Minoan civilization flourished by 2700 BCE. The Minoans were Bronze Age traders, capable of fine craftwork in pottery as well as bronze. They built great cities, and palaces with impressive architectural features. Inside were walls decorated with vibrantly colored frescoes. The presence of palatial estates indicates an elite leadership and a monarchist power structure, as evidenced by a grand palace at Knossos.

The Minoans were a literate people, albeit in a script that has yet to be deciphered (known as Linear A).

Natural disasters hit Crete during the Minoan civilization. The first was an earthquake in 1700 bce. Many palaces, including the one at Knossos, were destroyed. They were rebuilt more lavishly than before.

A 100 years later, a volcanic eruption on the nearby island Thera once again leveled housing. Palaces were rebuilt on yet a grander scale than their last incarnation.

By the 16th century BCE, Minoan culture had spread across the Aegean Sea, to neighboring islands and mainland Greece. Minoan commerce and influence extended into the Levant. The Minoans traded extensively with Egypt.

Mycenaean civilization began flourishing on mainland Greece around 1600 BCE, nurtured by cultural injection from the Minoans. Mycenaeans from the mainland invaded Crete in 1420 BCE: creating a new political order and sending the economic power and aesthetic achievements of the Minoans into decline.