Taste
All of life is a dispute over taste and tasting. ~ German philosopher Friedrich Nietzsche 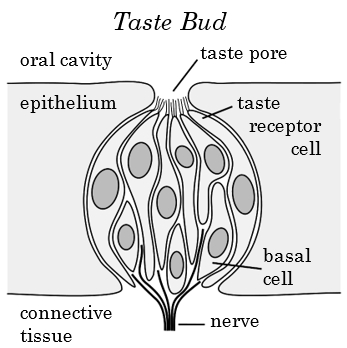 An adult has ~10,000 taste buds, but 10 to 100 million olfactory receptors. There 7 categories of odorant receptors and 7 basic tastes which allow distinguishing 1 trillion distinct scents.

Most taste buds sit on papillae: raised protrusions on the tongue’s surface. There are 4 types of papillae on our tongues: fungiform, filiform, foliate, and circumvallate. One – the cone-shaped filiform papillae – does not have taste buds.

A taste bud is a bundled group of 50–150 columnar taste cells. Taste cells within a bud have exposed tips that form a tiny taste pore. Taste cells extend microvilli (tiny hairs) through this pore. The microvilli bear the taste receptors.

Taste reception is rapidly adaptive: an initial strong response diminishes within a few seconds to a much lower amplitude.

The tongue is tough neighborhood: subject to friction and intense heat which destroys taste buds. Taste buds are in a constant state of cell renewal. Receptor cells are replaced by division and differentiation of neighboring basal cells. A taste bud has a typical lifespan of 5–20 days.

One myth about taste sensation is that different regions of the tongue are sensitive to different tastes. American psychologist Edwin Boring hypothesized the notion from misunderstanding a translation of a 1901 German paper that showed minute differences in sensitivities at different areas of the tongue.

Taste signals pass through the brain stem and trigger digestive reflexes: saliva flows in the mouth, gastric juices flow into the stomach. Saliva abets taste reception by carrying the object being tasted.

Humans are capable of 7 different taste sensations: sweet, starch (carbohydrate), sour, salty, savory (umami), fat (oleogustus), and bitter. Though water is tasteless, as Aristotle observed, humans can ‘taste’ water in the mouth, as can insects, amphibians, and other mammals.

Salty and sour tastes are sensed directly through ion channels, though sour is detected only when protons are transported across the receptor membrane. Sour arises from acids.

Alkali metal ions trigger a salty taste, but the further from sodium a substance is in the periodic table the less salty the taste. Table salt is sodium chloride: an ion compound needed – in small doses – by all known living creatures.

Sweet and bitter taste work through G protein-coupled receptors. The various sugars found in organic compounds taste sweet. Alcohol has an admixture taste based upon a sweet foundation. Alkaloids, such as caffeine, trigger bitter.

The savory (umami) sensation is activated by the amino acid glutamate, which plays a principle role in neural activation.

There is some overlap between sour and oleogustus for short-chain fatty acids, and between umami and longer-chain fats, but the taste of fat is distinct.

Carbohydrates uniquely activate taste receptors in a positive way. Carbs instantly facilitate better motor control and physical performance. This is biologically logical, as carbohydrates comprise the bulk of nutrition in a healthy diet.

Lining the lower airways to mammal lungs are cells that can sense bitter molecules and send signals to regulate breathing. Speculation for this adaptation varies: from preventing ingesting plant toxins, which are often bitter, to a bacterial defense. Bacteria produce bitter compounds. Minute quantities of bitter substances can be detected, whereas sweet and salty require higher concentrations to register.

Human taste is oddly entrained and deceived. Hot soup raises an alarm by its reception, yet the capsaicin in chili peppers, triggering those same receptors, get a much milder response. Peppermint cools by its minty methanol seizing up cold receptors.

Tellurium is a mildly toxic metalloid, chemically related to selenium and sulfur. Tellurium is rare on Earth; much more common in the cosmos. Contact with the tiniest bit of tellurium results in a reek like pungent garlic which can last for weeks.

Miraculin is a glycoprotein found in miracle fruit. Miraculin strips sourness from foods without altering their taste overtones. Though miraculin is not sweet, it bonds to the taste buds for sweet, putting them on alert for acidic tastes. This is invoked by stray hydrogen ions (H+).

Apple cider vinegar and a bit of miraculin tastes like apple cider. The effect lasts as long as the protein binds to the tongue, which can be up to an hour. Miraculin is commercially employed as a sugar substitute.

Italian physicist Alessandro Volta invented the battery in 1799. The term volt, which signifies electric potential, is named in honor of Volta.

Volta had a chain of volunteers each pinch the tongue of one neighbor. The two people on each end then put their fingers on opposite battery leads, thus inducing a current flow. Instantly, up and down the line, every person tasted each other’s fingers as sour.

Salty taste is also triggered by a flow of charges, but only of certain elements. Sodium most strongly triggers a salty reflex, but so too does potassium, sodium’s chemical cousin.

Both elements appear in nature in ionic form. It is the charge, not the chemical per se, that triggers the taste of salt.

Sodium and potassium ions are instrumental in sending nerve signals and facilitating muscle contractions. Other physiologically important ions, including calcium and magnesium, also have a vaguely salty taste.

But then, other ions of less or no physiological use come off as salty, including lithium and ammonium. Whether sodium and potassium taste salty or sour depends upon what else they are paired with.

Potassium chloride tastes bitter in low concentrations, but surprisingly turns salty in high concentrations. A significant does of potassium can shut the sweet taste buds down.

Gymnema is an herb found in the tropical forests of central and south India. It is quite high in potassium. Chewing gymnema leaves completely suppresses the sweet sensation. After chewing the herb sugar tastes like sand.

Gymnema has been a natural treatment of diabetes for thousands of years. Effective for up to 2 hours, it can fight sugar cravings.

The human sense of taste, as an evolutionary product of the environment, is a marvel in its natural setting, but a poor judge of the chemical elements in forms not normally encountered. Beryllium is a toxic, insoluble metal with tiny atoms. Pure beryllium does not naturally exist and is a relatively rare element throughout the universe. It bears no chemical resemblance to the complex sugar molecule. But the taste buds readily mistake beryllium for sugar.

Taste aversions are inborn. A newborn baby grimaces at bitter, while sweet, indicative of energy-rich nutrients, brings contentment. While the sense of taste is well-developed at birth, taste preferences change through life.

Animal species have different taste capacities and live in their own world of taste. For instance, cats lack sweet receptors. This modified taste sense lends to cats’ evolutionary niche as carnivores. Plants, with a relatively high sugar content, lack appeal, while savory meat is tremendously tasty.

Most birds lack much of a sweet tooth. Hummingbirds are a notable exception, as nectar is as indispensable to them as essential amino acids are to humans. Hummingbird acuity to sweetness evolved from savory taste receptors, affording the necessary accuracy to detect sugar content.