Smell is a potent wizard that transports you across thousands of miles and all the years you have lived. ~ Helen Keller 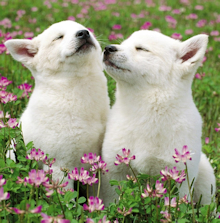 Olfaction is of odorants. An animal with a keen sense of smell is macrosmatic.

Insects and other invertebrates smell with their antennae, and through pores on their body, chiefly the mouth and legs. For vertebrates, odorants are detected by specialized receptor cells in the nasal cavity.

Bacteria do not have noses, but they do have the biochemical traction for olfaction. Bacteria respond to odors. Certain chemicals evoke an urge to get a move on.

The scent of ammonia provokes the soil-dwelling bacterium Bacillus licheniformis to form a biofilm. A colony can get to a nutrient source and feast faster than they could by going solo. The nitrogen in ammonia (NH3) is the draw. Nitrogen is essential for producing proteins and nucleic acids.

Bacteria respond to other gases, including oxygen and carbon monoxide. Bacteria migrate to an area with an oxygen concentration optimal for growth. Those 2 gases produce no scent (that we know of). Ammonia does.

That bacteria can “smell” may seem an overstatement. But if olfaction is defined as sensing a volatile molecule, that is exactly what bacteria do.

As insects primarily communicate chemically, insect mind-brains have a strong discrimination of odorants. Olfaction sensitivity in many insect species, particularly eusocial insects, is highly tuned to the pheromones used for communication. But insects employ olfaction for many purposes. Butterflies follow scent to nutrition. Bees can identify their hive-mates by smell. A beehive has its own scent: home sweet home.

The aerial environment usually presents a variety of odors at any one time. Tracking a scent to its source is tricky.

When multiple odors mix, insects and other animals perceive them as a perceptual unit, not as individual components. Nevertheless, insects can distinguish concurrent scents from closely spaced sources based on millisecond differences in their arrival. This lets an insect suss an odor to its source.

Though aquatic, fish have a keen sense of smell. Many fish use their sense of smell to find food and identify mates. Lobsters have an amazing ability to follow small scent signals in turbulent water.

Catfish can identify other individual catfish by smell. Abetted by olfaction catfish maintain a social hierarchy.

Salmon smell their way back to their spawning grounds to breed; so do sea turtles.

Many bird species lack a good sense of smell, but some seabirds follow their nose. Petrels feed on zooplankton, foraging by scent. Zooplankton release dimethyl sulfide (DMS) after grazing on phytoplankton (single-celled aquatic plants). Petrels birds can detect DMS up to 4 km away. Birds in the same order that don’t feed on zooplankton show no interest in DMS if they can detect it.

Vultures and kiwi have a keen sense of smell. Their lifestyle necessitates it.

The accessory olfactory system is primarily employed to detect pheromones, though pheromones can also be detected by the main olfactory system. A pheromone is a secreted or excreted hormone intended as a conspecific communication signal of some sort.

Early mammals evolved larger brains to better process smells. The fossil record shows a dramatic increase in the size of the olfactory bulbs in mammalian brains that process scents around 190 million years ago. Concurrently reptilian predators worked the day shift. A keener sense of smell helped mammals hunt at night.

Like vision, olfaction can be improved by sniffing in stereo. Moles have stereo-smell which they use for hunting and navigation. Other mammal families likely have this ability.

Odorant receptor genes form the most prolific gene family in the genome of many animals. The mouse genome has 1,200 such genes. For a balanced sense of smell to function, genetic expression must be selected in proper proportion to other odorant receptors.

For vertebrates, smells are picked up by olfactory receptors in the olfactory epithelium. How well one can smell depends upon the nasal real estate dedicated to the task, and the density of olfactory nerves at work.