From a purely physical perspective, human vision is a miraculous appreciation of photonically-inspired excitement, employing an array of tissues set in peculiar configurations. Before relating the process let’s examine the instruments.

The human eye is an intricately layered organ, sensing more than images, though that is its most evolved function. ~70% of the body’s sensory receptors are in the eye. 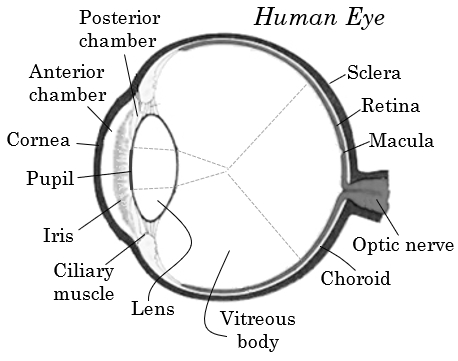 The human eyeball resembles a 2.5 cm sphere, but its exterior is a fused 2-piece unit.

The transparent, strongly refractive curved cornea at the front is linked to the sclera: the white of the eye that covers over 80% of the eyeball’s exterior. The sclera sits in the eye socket, tugged by 6 sets of muscles to control eye movement.

The cornea of primates, humans included, has 5 layers, whereas cats, dogs, and other carnivores have a cornea with 4 layers. The missing layer in carnivores, called Bowman’s layer, is an 8–14 mm thick protective layer of irregularly arranged collagen that protects the corneal stroma.

The transparent stroma accounts for 90% of the cornea’s thickness, comprising water (78%) scaffolded by collagen (16%), which gives the cornea its shape, strength, and elasticity. The collagen’s unique form is an ingeniously intricate arrangement, essential in producing the cornea’s transparency.

Behind the cornea is the aqueous humour: a watery reservoir in both the anterior and posterior chambers, continuously filled and drained in a precise ballet of coordination to maintain intraocular pressure at 15 mm Hg above atmospheric pressure.

Behind the aqueous humour is the iris: the highly individualized colorful disc of the eye. People with blue or light-colored irises tend to be more light-sensitive, as there is less light-absorbing pigment.

Muscles connected to the iris expand or contract the pupil: the aperture at the center of the iris. This adjustment process, termed adaptation, is a high-speed autonomic feedback loop, responsive to the level of light entering the eye, fed back from the mind-brain to the eye to optimize image input.

The pupil appears black because light entering the eye is absorbed by the tissues within, with none reflected. The human pupil is typically 4 mm diameter, with a range from 2 mm (ƒ/8.3) to 8 mm (ƒ/2.1), bright to dark. Aging lessens dilation capacity, to an elderly limit of 5–6 mm, which limits contrast receptivity, and hence visual acuity, especially night vision.

Primate pupils are round. Some other species, such as cats, have slit pupils.

Besides acting as a light access portal, the pupil is an autonomic storyteller: dilating to fear or pain. There is also a task-evolved pupillary response: pupils tend to dilate slightly with a heavy cognitive load, such as concentration or intense sensory discrimination. Certain drugs affect pupil size: alcohol and opioids constrict, while hallucinogens and stimulants, such as cocaine, cause dilation.

Behind the pupil sits the lens. Though the cornea accounts for most of the visual power of the eye, its focus is fixed. The lens curvature adjusts to focus based upon viewed object distance, becoming flatter for distance viewing, and curving for close-ups. The ability of the eyes to alter focal plane via the ciliary muscle is termed accommodation.

Although the vitreous contacts the retina, it does not adhere except at the optic nerve disc, where the retina has 1.2 million nerve axons for electrical signal transport to the brain.

The choroid lines most of the eyeball. It is a dark layer that cuts reflection within the eye and provides the blood vessels that feed the organ.