Bone conduction transmits sound waves by vibrations of the skull bones, directly stimulating sound-sensitive cells in the inner ear. Humans hear their own voice via bone conduction. A hearing aid can help some totally deaf people by enhancing bone conduction.

Although some people can wiggle their ears, human auricles have little importance compared to other mammals. Many mammals, especially those with large ears, such as rabbits, can move their auricles in various directions to focus sound detection.

After being collected by the auricle, sound waves pass through the ear canal to the eardrum, causing it to vibrate. 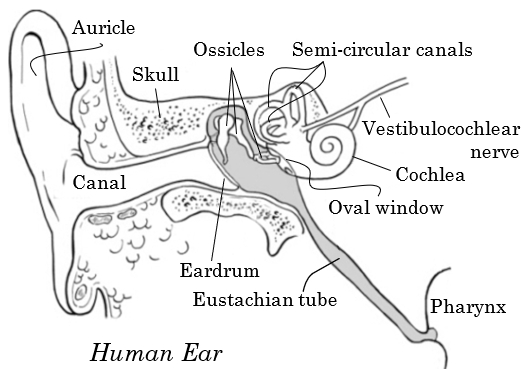 Human eardrums shift toward the same direction that the eyes are looking. When looking left, for instance, the drum of the left ear is pulled further into the ear, while the right eardrum is pushed out. Eardrum movement begins as early as 10 ms before the eyes even start to move and continues for a few tens of milliseconds after the eyes stop.

Eardrum vibrations are transmitted through the ossicles: the chain of bones in the middle ear. There are 3 ossicles: the malleus (hammer), the incus (anvil) and the stapes (stirrup).

Eardrum vibrations move the malleus, which hammers the incus, which then stirs the stapes.

Vibrations passing from the relatively large area of the eardrum through the ossicles to a smaller area concentrate vibrational force, amplifying sound. By the time a percussive wave has traveled from the eardrum to the oval window, it has been amplified over 20 times.

When sound vibrations reach the stapes, it rattles the oval window: the membrane-covered opening to the inner ear. The oval window sets in motion the fluids in the 3 semi-circular canals, which help provide a sense a balance. Each canal has hair cells with cilia that act as motion sensors. The hair cells turn fluid motion into an electrical signal that travels to the brain via the vestibular nerve.

Both hearing and touch rely upon perception of vibrations. A combination of weak sound and weak vibration applied to the skin is better detected than either signal alone. A sound/vibration combination boosts the perceived volume of a sound.

Hearing a sound can boost touch sensitivity, though the sound frequency must correspond with the felt vibrational frequency. A vibration felt at a lower frequency than a sound tends to skew the pitch heard downwards, and vice versa. Sound can bias whether a vibration is felt. The converse is also true.

Hearing may be an evolved sense of touch, better attuned to frequency analysis. The region of the human brain associated with sound processing is activated during touch.