The body is a vehicle of consciousness. Chakras are the wheels that carry this vehicle. ~ American psychologist and yoga teacher Anodea Judith

The life-force energy systems – lengyres – of all organisms have 4d focal points, but only the human energy system is well understood. A lengyre locus is called a chakra.

The term chakra derives from the Sanskrit word for wheel. That is because chakras, when looked at head-on, resemble spinning vortices of energy.

Humans have 7 major chakras. The energy of each chakra is layered, with the outer layer having radiative effect to the bodily energy system. 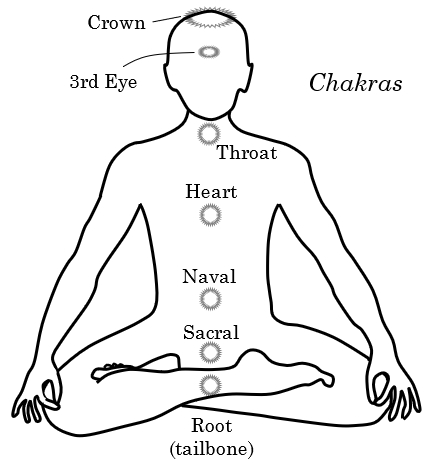 Each chakra has a degree of openness and flow. This affects a person disposition, awareness, and health. A person with open and balanced chakras that are well integrated is healthy and aware. Conversely, blocked or overactive chakras are symptomatic of an unbalanced energy system, and a factor in chronic illness that takes physical and psychic expression.

The root chakra (1) is located at the base of the spine, in the tailbone area, between the genitals and anus. The root chakra connects to the material world, affecting one’s degree of feeling grounded and internally secure. A fearful person has a blocked root chakra.

The solar plexus (naval) chakra (3), in the stomach area, goes to sense of self: one’s self-confidence and self-esteem. Self-control and discipline are centered in this chakra. The energy of the naval chakra is expressed in social interactions. A timid person has an underactive naval chakra, while an overbearing person’s solar plexus chakra is working overtime. The naval chakra is associated with the silver cord, which is a primary connection between the body and the other dimensions of existence (ed).

The heart chakra is also the central energy locus for emergently fabricating the body in conjunction with other chakras. Psychological well-being translates into bodily health via the heart chakra.

The throat chakra (5), at the throat above the breastbone, relates to self-expression. Bad listeners who like to dominate conversations have an overactive throat chakra. Those who easily deceive have a blocked throat chakra.

The 3rd-eye chakra (6), in the center of the forehead between the eyes (at the browline), is key to intuition: having an open channel to receiving wisdom (insight). Rigid thinking, strongly held beliefs, and deference to authority result from a blocked or underactive 3rd eye. A person prone to fantasy has an overactive 3rd-eye chakra. Just as the heart chakra is central to bodily emergence, the 3rd-eye chakra is the energy hub of the mind.

The crown chakra (7), at the top of the head, concerns connectivity with coherence: the cosmic fabric weaver of Nature. The natural bliss of Ĉonsciousness channels through the crown chakra into one’s being. Stereotypical thinking or strong disinclination to spirituality signifies an underactive crown chakra.

Formless realization contains no information about the world of form. Unless you find a way to take your nirvanic realization and express it in integral samsaric ways, you will end up creating a very petty, narrow belief-system that doesn’t take into account the riches of the manifest realm. ~ Ken Wilber (Samsara, a concept in Hinduism & Buddhism, is the eternal cycle of birth, suffering, death, and rebirth.)

The chakras are typically interpreted as having spiritual significance. Yet the energy system is biological in nature. Chakras are as mystical as computing technology is magical. That scientists have not investigated lengyres for lack of adequate instrumentation or interest is meaningless.