Besides hemispheric bifurcation, the human cerebral cortex is conventionally characterized as having 4 lobes: frontal, parietal, temporal, and occipital. 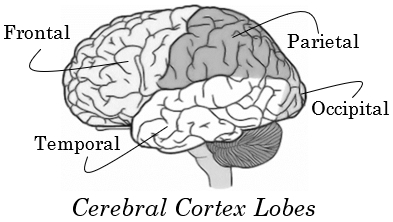 The frontal lobe contains most of the neurons in the brain that are sensitive to dopamine. For mammals, dopamine is associated with reward and its attendant functions: attention, motivation, learning and planning. Dopamine tends to selectively limit sensory input from the thalamus to the forebrain.

The temporal lobe is the region of the cerebral cortex in both hemispheres that is active when the mind is perceiving, processing emotions, and working with language.

The temporal lobe contains the hippocampus, which is active in shuffling information from short-term to long-term memory, modulated by the amygdala, which is energetic during emotional reactions.

The hippocampus and amygdala are generally considered part of the limbic system. The limbic system is a set of brain structures related to emotions. Memories are formed by emotional excitement, including motivation. Paul MacLean invented the limbic system in the 1940s, and the concept has become controversial: considered archaic by some, as it is based upon brain anatomical relations no longer accepted as accurate.

(The limbic system controversy highlights the artifice in modern brain science, with differentiation primarily based upon identifying localized areas of intense measured electrical activity during certain tasks, disregarding that less intense electrical jitters elsewhere may be as essential. Taking electrical measurements of brain activity has been the main source of misattribution in neurobiology: namely, attributing mentation to neurons while ignoring glia, which communicate with each other mainly through calcium-based energy waves. Further (and most saliently), the brain correlates with but is not causal to mental activity, thereby denigrating as significant the exercise of identifying localized functionality. Such assumptive miscomprehension led to tens of thousands of brain surgeries which caused more damage than good. Though research has been voluminous, the conventional matterist theories of neurobiology today are about as informed as Hippocratic humorism. This section on intelligence physiology is mostly trivia: more about matterist misinformation than meaningful information. The takeaway point is that physiology, like all of Nature, is stunningly intricate in presenting the ruse that physicality is reality.)

The mammalian brain occipital lobe is lively during visual processing. From disparate tidbits of photonic input, the mind presents a view of the world while the occipital lobe is in a frenzy of electrochemical activity.

We can no longer view the brain as a bunch of specialized compartments that don’t interact much. ~ American psychologist Ladan Shams