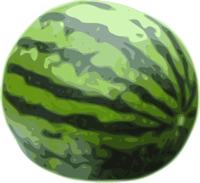 Watermelon originated in southern Africa. There is a Sanskrit word for watermelon, and it is depicted in early Egyptian art over 4,000 years old. Watermelons were cultivated in India in the 7th century and had reached China by the 10th century. Contemporaneously, the Moors introduced watermelon in Spain, whereupon it spread through the warmer climes of Europe. European colonists and slaves took watermelon to the New World in the 16th century.

The watermelon plant is an annual ground-dwelling, scrambling vine in the gourd family. Watermelon is grown worldwide in tropical and sub-tropical biomes for its large fruit of the same name, which is a special kind of berry called a pepo – a very big berry: watermelons weigh anywhere from 1 to 20 kg.

A pepo is a fruit with many seeds, a tough outer skin or rind, but not internally divided by septa (membranes). Gourd family fruits are usually pepo, including squash, papaya, and passion fruit.

Watermelon pulp is usually eaten raw, though the rind is sometimes preserved as a pickle. Watermelon has vitamins A and C, and is a good source of lycopene.