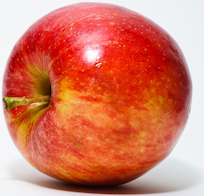 The deciduous apple tree originated in the mountains of central Asia. The apple was one of the first cultivated fruits and is one of the most widely grown tree fruits. There are over 7,500 apple cultivars, variously bred for tastes and uses: eating fresh, cooking, or for cider.

The apple has symbolically figured in many cultural mythologies. In Norse mythology, the goddess Iðunn gave apples to the gods that grant them eternal life. To the Greeks, the apple was a symbol of love.

For Jews and Christians, the apple symbolizes temptation to evil. In the Biblical book of Genesis, Eve picked this forbidden fruit in Eden and coaxed Adam to share it with her. Hence, the allegorical downfall of man was brought about by temptation offered by women; very heavy symbolic sexism, as well as an apt observation on the weak wills of men.

‘Conventionally’ grown apples in the United States are loaded with pesticides. One is diphenylamine (DPA), a carcinogen banned in Europe. DPA is sprayed on 80% of conventional apples after harvesting to slow browning. The US Apple Association asserts “there is no cause for concern, and certainly not a safety issue.” The US EPA has not looked at DPA since 1997.

Apples offer dietary fiber, phytonutrients, and copious vitamin C. And, reputedly, an apple a day keeps the doctor away.