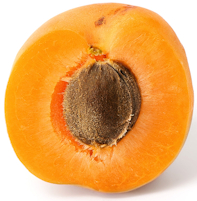 The apricot is a small tree that produces small golden fruit. The Chinese cultivated apricots over 4,000 years ago. Silk Road trade took the apricot to Iran, where the Greeks and Romans discovered it during the 1st century ce.

Fresh apricots are succulently delicious, but they do not travel well: hence the popularity of dried apricots, typically preserved with sulfur dioxide, which turns the fruit a vivid orange.

In Europe, apricots earned a reputation as an aphrodisiac. Shakespeare’s A Midsummer Night’s Dream (1597) dreamily suggests such.

Apricot seeds, which have anti-herbivore cyanogenic glycosides, have long been employed medicinally. Apricot seeds were used against tumors by the 6th century. During the 17th century in England, apricot oil was also used against ulcers.