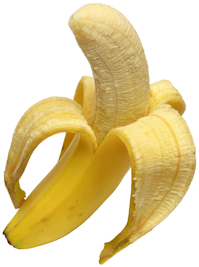 Bananas are the edible fruit of numerous different trees in the Musa genus, indigenous to Southeast Asia and Oceania. The earliest evidence of banana cultivation comes from eastern New Guinea 6,500 years ago. Portuguese sailors brought bananas to the Americas in the 16th century.

After the American Civil War, multinational banana companies established plantations in what were later called the “banana republics” of Central America. By the 1920s, the banana was one of the most popular fruits in the US.

By far the most important commercial banana cultivar is the Cavendish (Musa acuminata), particularly the Dwarf Cavendish, owing to its ease of transport, shelf life, and taste. Grand Nain (Chiquita Banana) is another popular banana.

Export bananas are picked green. They ripen in air-tight rooms after arriving in their destination country. Ethylene gas is pumped into these rooms to induce ripening. The vivid yellow color of the supermarket banana comes from the artificial ripening process.

Bananas used in cooking are called plantains, which are starchier than Cavendish.

Bananas an excellent source of dietary fiber and vitamin B6. They also contain vitamin C, manganese, and potassium.