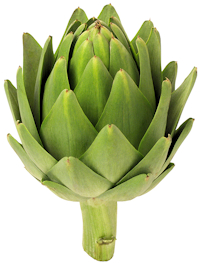 Globe artichoke is a variety of thistle. The edible portion is the flower bud before blooming.

The naturally occurring variant of the artichoke – the cardoon – is native to the Mediterranean area. The ancient Greeks and Romans ate artichokes.

Artichokes were cultivated in France by the end of the 15th century. The Dutch introduced artichokes to England around that time. Artichokes arrived in United States in the 19th century, brought to Louisiana by French immigrants, and to California by Spanish ones. The Mediterranean continues to be the predominant producer of artichokes.

The heart and bottom part of the leaves are commonly eaten. The stem, which is typically thrown away, is also edible, having a similar taste to the heart. Artichoke tea is popular in Vietnam.

Artichoke is an ample source of dietary fiber, and vitamins B, C, and K. Artichoke is mineral-rich, and extremely abundant in antioxidants. Artichoke engenders healthy gut flora, and so aids digestion; improves liver and gall bladder function; and is good for the cardiovascular system.