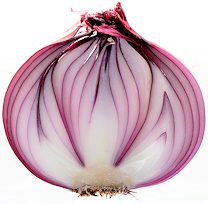 Life is like an onion: you peel off layer after layer and then you find there is nothing in it. ~ American cultural critic James Huneker

Onions are native to central Asia. The history of onions is layered in mystery. They have been highly regarded as a food for at least 7,000 years.

To ancient Egyptians, the onion – with its spherical shape and concentric rings – was the symbol of eternal life. Onions were placed in tombs under the belief that the odor could revive the dead.

During the Middle Ages, onions were used as currency. Tenets might pay their rent in onions, which were a popular gift item.

Onions are a biennial or a perennial plant, but typically treated as an annual and harvested after the first growing season.

Onions have antioxidants and other phytochemicals that act to keep inflammation in check and balance cholesterol levels. Onions possess anticancer properties.