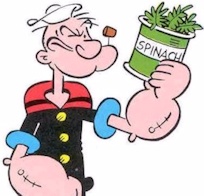 Spinach as a crop originated in Persia, where it was cultivated by the 4th century. Its appreciation had spread to China via Nepal by the 7th century.

Spinach reached the Mediterranean in the early 9th century, landing first in Sicily. In the centuries that followed, spinach spread throughout Europe.

Spinach has a lengthy taproot, but it is the leaves that are the nutritional treat. Spinach is eaten worldwide, both raw in salads and in cooked cuisine.

Spinach is one of the most nutritious foods, bar none: high in a variety of vitamins (A, B, C, E, K); minerals, most notably iron and calcium; and other phytonutrients.