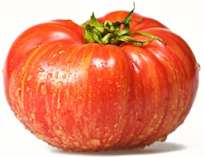 A world without tomatoes is like a string quartet without violins. ~ American author Laurie Colwin

Like its cousin the potato, the tomato arose in the Andes, and its initial acceptance in northern Europe was stymied by the superstition that plants in the nightshade family could be anything but toxic.

Though a berry fruit, the tomato is considered a vegetable. Tomatoes had become popular with the Mexica and other indigenous people of Mesoamerica by 500 bce.

Columbus may have brought the tomato back to Europe in 1493, or the tomato may have been on the victory voyage of Spanish conquistador Hernán Cortés, who savagely destroyed the Mexica civilization in 1521. Either way, the tomato made its way to Europe courtesy of the Spanish empire, which radiated the red fruit throughout the Caribbean, and took it to the Philippines, from whence it spread to Asia. By that time, the tomato had established itself in Mediterranean cuisine, thanks to easy acclimation to the climate there.

Ketchup was a 17th-century concoction of the Chinese that squirted its way to the United States via the Malay states (Malaysia and Singapore), by way of Britain. Chinese ketchup was a fish-based sauce, used either as a condiment or for cooking. The Brits deemed ketchup exotic, finding that it perked up otherwise bland British cuisine, including roasts and fried foods.

The early 19th century found ketchup on American dinner tables. The Yanks transformed ketchup from its fish base to a tomato-based sauce that was sweetened, soured with vinegar, and spiced with cloves, allspice, nutmeg, and ginger. In 1876, F. & J. Heinz brought “blessed relief for mother and the other women in the household” with its branded tomato ketchup.

The tomato has suffered from commercialism, which bred out the flavor in favor of firmness and a uniform red when ripened. This is true of most supermarket produce, which has been bred for a long shelf life at the expense of all else.

The only tasty tomatoes left are heirlooms and other varieties not prized for their good looks. There are 7,500 different tomato cultivars.

Tomatoes saucily offer vitamins A, C, and K, potassium, magnesium, antioxidants, and other phytonutrients, including lycopene when cooked.