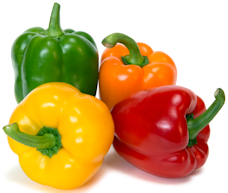 The bell pepper (aka sweet pepper or simply pepper) is native to Mexico, Central America, and northern South America. Bell peppers were cultivated there for thousands of years before Columbus took seeds back to Spain in 1493. From there they spread throughout the world.

Bell peppers are a botanical fruit considered a vegetable; commonly sold in supermarkets in green, yellow, orange, and red hues.

Though one variety maintains its green color even when fully ripe, red peppers are often simply fully ripened green peppers, with yellow and orange at intermediate stages.

Ripening on the vine engenders sweetness. Green peppers are less sweet and slightly more bitter than yellow or orange peppers. Red bell peppers are the sweetest.

Ripening also enriches the nutrient content. Red peppers have twice as much vitamin C as green ones; the level of vitamin A and lycopene is 9 times higher in red peppers.