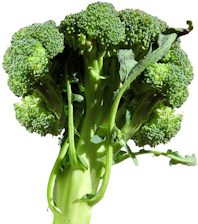 Like cauliflower, broccoli is a form of cabbage in which its florets are densely packed in fractal fashion. Broccoli, cauliflower, cabbage, Brussel sprouts, turnips, radish, and other green leafy vegetables are called cruciferous, and belong in the Brassica family.

Broccoli was beloved by the upper crust of ancient Romans, who consumed it several times in the course of a single banquet.

Native to Italy, broccoli made it to England and America in the 18th century with Italian immigrants. But the bud was slow to bloom in United States: broccoli did not become popular there until the 1920s.

Broccoli is a leafy green superfood: high in protein, rich in vitamins A and B, and antioxidants. The nutrients in broccoli help prevent aging of the eyes and promote cardiovascular health. Broccoli reduces the incidence of stomach disorders, ulcers, and bladder and prostate cancers through its anti-bacterial properties. As a detoxifier, broccoli helps fight the carcinogenic effects of air pollution.

Though broccoli is found year-round in markets, peak season is October through April.

Broccoli is most healthful when cooked as little as possible. Frozen broccoli is just as wholesome as fresh. The stems are as edible and nutritious as the buds.