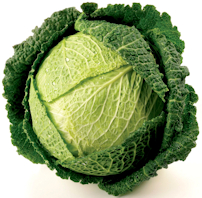 Nutritionally rich, cabbage has been both a food and medicine throughout history; domesticated in Europe before 1000 bce. Wild species are native to southwestern Europe and the Mediterranean. Beyond its appreciation as a food, cabbage had religious significance to the ancient Egyptians.

The ancient Greeks consumed cabbage as a laxative and drank cabbage juice as an antidote for mushroom poisoning. Ancient Romans ate cabbage for hangovers. 17th century sailors brought cabbage on board to ward off scurvy (vitamin C deficiency).

Cabbage has long served as a subsistence food for the lower classes in many cultures: Ireland and Germany are exemplary. For that reason, the upper class long looked down their noses at cabbage. The unpleasant smell of overcooked cabbage did not help. Nor did the fact that overconsumption promotes bloating and flatulence.

Cabbage is low in calories and high in dietary fiber. Besides its bounty of vitamin C, cabbage is high in vitamins B6, B9, and K, as well as plentiful potassium and manganese.

There are 3 main types of cabbage: green, red/purple and Savoy, which is the crinkle-leafed variety. Savoy cabbage (shown above) is the most fibrous.