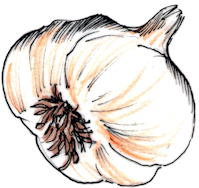 A close relative of the onion, garlic is a most odiferous root vegetable thanks to its high sulfur content. Garlic’s potency has been an inspiration throughout history, inspiring myths and superstitions.

Garlic has been consumed by people for at least 7,000 years. The ancient Egyptians revered garlic, even using it during the mummification process.

In ancient Greece and Rome, garlic was believed to provide strength and vitality. Roman generals planted garlic fields in conquered countries to confer courage on the battlefield. Owing to its smell and association with magic, garlic was often shunned by the Roman aristocracy. But it was eaten by plebeians and fed to slaves and troops. Julius Caesar bucked tradition by consuming garlic with abandon.

Medieval Greek travelers would disguise their travel route by leaving garlic at crossroads so that demons could not follow them. Muhammad wrote of garlic sprouting where the devil trod after being cast out of the Garden of Eden. These myths may have been the source of inspiration for garlic warding off the vampires that arose during the Middle Ages in Transylvania, Romania.

Several traditional European cultures have considered garlic a potent white magic. In the Philippines, folklore tells of garlic having the power to drive away evil spirits.

Certain Buddhist sects in China and Vietnam disfavor garlic as one of the Five Pungent Spices, particularly its supposed power to augment sexual desire and anger. (The Five Pungent Spices are: garlic, onions, leeks, chives, and asafoetida (the gum from the root of ferula, an herb native to the deserts of south-central Asia, and long cultivated in India).)

It took many centuries for garlic to become accepted throughout Europe and Asia. The Spanish brought garlic to the New World in the late 1400s, where it quickly caught on with the indigenous peoples. But immigrants were slow to add the smelly bulb to their larders. It was only in the early 20th century that Italian immigrants transplanted appreciation of garlic to North America.

Garlic was used as antiseptic during the World Wars, especially against gangrene. Garlic has considerable antimicrobial power, both against bacteria and fungi.

Besides bad breath, garlic delivers vitamin B6, C, calcium, manganese, selenium, and phytonutrients. Garlic is beneficial to the cardiovascular system.