Over 1/3rd of the world’s population relies upon fish as a dietary mainstay. As with other human endeavors in modern times, fishing industrialized. The result has been massive overfishing.

Stocks of almost all fish consumed have been severely depleted. Since the mid-20th century, 90% of the world’s large fish have been removed from the seas, unbalancing oceanic ecology.

One commercial response to overfishing has been aquaculture: farming fish. Ocean fish farming began in the Mediterranean in the early 1980s. By the end of the 20th century, it had become widespread in countries that historically have had a significant fishing industry. Worldwide, over 220 species of finfish and shellfish are farmed.

By the first decade of the 21st century, over 40% of seafood eaten came from farms. Over 80% of the salmon consumed in the US is farm-raised.

Aquafarms consist of isolated species penned in grossly overcrowded and unsanitary conditions. Fish are stewed in their own feces.

Aquaculture is a prodigious pollution producer. According to the Norwegian government, salmon and trout farms in Norway alone produce as much sewage as New York City. This raw sewage, dead fish corpses, and antibiotic-laden fishmeal sludge settles below cages and can cause the ocean floor to rot.

A salmon 76 cm long may suffer in a space 110 x 55 cm. Trout are even more crowded. 27 trout may have to live their lives in a space the size of a bathtub.

Fish repeatedly wound each other through constant collisions. Cramped conditions promote infections and infectious diseases that can quickly wipe out populations. Up to 40% of farmed fish die before being slaughtered.

Fish that were traditionally farmed in Asia and parts of Africa – catfish, carp, and milkfish – could be raised efficiently from a resource standpoint because they are herbivorous or omnivorous. But tuna, salmon, trout, and other large fish that are favored by American and European palettes are carnivorous. Atlantic salmon is the dominant species farmed worldwide.

Great quantities of wild fish must be caught to feed carnivorous farmed fish. To create 1 kg of fishmeal requires catching up to 5 kg of open-ocean fish. 37% of all global seafood is now ground into feed.

If the goal of aquaculture is to produce more fish for consumers than can be produced naturally, then it will become increasingly counterproductive to farm carnivores that must be fed large amounts of wild-caught fish that form the foundation of the ocean food chain. ~ American ecologist Rosamond Naylor

Creating fishmeal concentrates the man-made pollutants found in small ocean fish. This loads farm fish with methylmercury, arsenic, PCBs, DDT, dioxins, and other poisonous chemicals that are delivered to your dinner plate.

Omnivorous fish are feed a different fishmeal; one that removes the best reason to eat fish.

One of the nutritional benefits of fish is ω-3 (omega-3) fatty acids, which wild fish get from aquatic plants, and, up the food chain, from eating other fish. Herbivorous fish are fed vegetarian seed feed: pellets made from corn, soy, and/or grains – with little or no ω-3. Fish fed a high-corn diet accumulate unhealthy levels of the wrong fatty acids: high in ω-6 and low in ω-3.

It may look like fish and taste like fish but does not have the benefits – it may be detrimental. ~ American biologist Floyd Chilton

Per edible portion, wild salmon has 15 times the ω-3 of tilapia. Farmed tilapia have a fraction of ω-3 compared to their wild counterparts.

The ω-3 content of a fish depends on what it eats. Most fish need a healthy helping of fatty acids to grow. But not tilapia. That’s one reason fish farmers love tilapia: seed feed is cheap and skipping on oily fish meal reduces pollution.

Farmed fish regularly escape into the wild. A million salmon escaped from Scotland farms in the 3 years 1998–2000. (Farmed fish losses are not regularly reported. The aquafarm industry is largely unregulated.) Though containment techniques have improved, the number of escapees fails to fall because the industry is expanding.

The association of fish farms with disease emergence in sympatric wild fish stocks remains one of the most unresolved threats aquaculture poses to coastal ecosystems and fisheries. ~ Canadian ecologist Martin Krkošek et al

One of the immediate dangers that farmed fish bring into the wild is sea lice, which are ubiquitous in fish farms.

Sea lice are tiny copepods that latch onto fish: feeding on tissue, creating lesions that make it hard for fish to regulate their body fluids. These saltwater parasites can be found on wild adult salmon in the ocean, but not on juveniles, which hatch in fresh water and then swim to the sea.

While adult salmon can tolerate mild infestations, younglings cannot. Escaped farm fish introduce sea lice into rivers where they encounter young salmon. Even smolt heading out to the sea can become terminally infected by passing by a salmon farm. 80% of a salmon population can be wiped out in a single generation. Local extinction can happen within 4 generations.

Wild and farmed fish interbreed. In some rivers 80% of salmon are off the farm. The negative effects of hybridization begin with the 2nd generation, when genetic effects negatively affect foraging and breeding. Unfamiliarity with natural conditions render hybrid fish more vulnerable to predators and disease in the wild.

Salmon farming has reduced survival of wild salmon and trout in many populations and countries more than 50%. Escaped farm salmon breed with wild populations to the detriment of the wild stocks. Diseases and parasites are passed from farm to wild salmon. ~ Canadian zoologists Jennifer Ford & Ransom Myers

There are no regulations in the United States and most other fish farming countries to treat fish humanely. Slaughtering is a tortuous process that can leave fish in excruciating pain for 15 minutes or so before they expire.

In Southeast Asia, shrimp and milkfish are extensively farmed. The freshwater milkfish has been farmed for 800 years; a practice that began in the Philippines using shallow ponds and spread throughout Southeast Asia where milkfish were naturally found.

In coastal areas, mangroves are cut down to accommodate cage aquaculture. The environmental damage is inestimable.

Mangrove forests protects coasts from battering storms, provides flood and sediment control, and serves as a nursery habitat for many aquatic species. When these forests are lost, sediment runoff can smother seagrass beds and coral reefs. This creates an ecological cascade of ecosystem degradation that can lead to large losses in wild aquatic species. 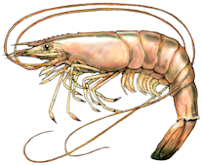 Farming shrimp costs half the biomass that otherwise could be caught under natural conditions. This is, in effect, a transfer of wealth from local fishermen to investors in aquafarms.

Moving captive fish stocks for aquaculture increases the risk of spreading pathogens. In Europe, epidemics in wild Atlantic salmon stocks have been linked to moving and restocking aquafarms.