Fennel is a hardy, perennial herb indigenous to the Mediterranean shores. Its bulbous base is eaten as a vegetable.

In Greek mythology, Prometheus used the stalk of a fennel plant to steal fire for humans from Olympus, the mountain home of the gods. Numerous cultural myths exist for gracing humankind with fire by theft. Only the Greek version involves fennel.

Absinthe is a highly alcoholic spirit (45–75% alcohol); often greenish, from its inclusion of the juice of the flowers and leaves of wormwood (Artemisia absinthium). 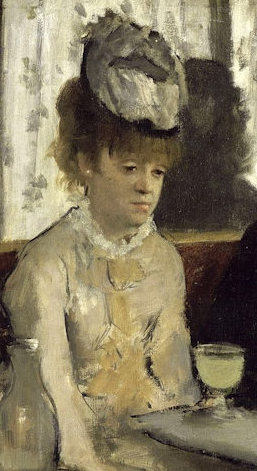 Absinthe is flavored with anise and fennel. It is typically diluted prior to drinking.

Originating in Switzerland in the late 18th century, absinthe became celebrated in literature as la fée verte (the green fairy). (Pictured: a painting of a woman in a bar drinking absinthe, by French impressionist Edgar Degas.)

Absinthe earned exaggerated vilification as a dangerously addictive psychoactive drug. By 1915, absinthe had been banned in the US and much of Europe. The psychedelic compound thujone was the supposed source of absinthe’s mind-altering power, but thujone is in the spirit only in trace amounts.

Absinthe is no more dangerous than ordinary booze. It revived as a celebrated spirit in the 1990s.

Fennel is a traditional medicine for failing eyesight. Fennel syrup is a folk remedy for chronic coughing.

Fleas dislike fennel. It is used in powdered form in kennels and stables to drive off fleas.