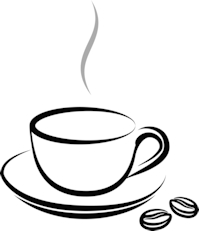 I like coffee because it gives me the illusion that I might be awake. ~ American comedian Lewis Black

Plants put caffeine in their seeds, leaves, and fruit as an insecticide. Flowering plants lace their nectar with a touch of caffeine as a reward memory perk for pollinators. In humans, caffeine is a stimulant, affecting several neurotransmitters.

Coffee is the world’s most widely consumed psychoactive substance: legal and unregulated throughout the world with rare exception. Coffee is the 2nd most-traded commodity on Earth. Oil is the 1st.

Coffee beans are the pit (seed) of the coffee cherry; the fruit so-called because of its red color.

Coffee and tea are the most common ingested forms of caffeine. Tea contains more caffeine than coffee by dry weight, but dilution in tea is much greater.

Tea is the stuff of legend in China. The great and powerful Emperor Shénnóng is credited with its discovery.

History is also shaky about coughing up the first coffee consumer. African tribes mixed coffee fruit and seeds with animal fat and consumed the concoction as an energy snack.

The earliest credible cup of evidence for drinking coffee is in the mid-15th century: Sufi Muslim monks in Yemen brewing their own. From its likely origination in Africa, the bean traveled to an enthusiastic audience at every stop. 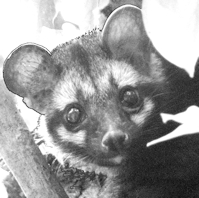 The most expensive coffee in the world is kopi luwak. This Indonesian blend is harvested after coffee cherries have been eaten and excreted by the Asian palm civet, a small catlike creature. Kopi luwak costs $50 a cup, with the coffee blend selling for up to $700 per kilogram.

The traditional method of collecting feces from wild civets gave way to intensive farming, in which civets kept in small cages are force-fed coffee cherries. The civets suffer horrific conditions and die young.

Genuine kopi luwak from wild civets is now nonexistent. Fake kopi luwak is the norm. There is no regulation on care of civets, or for the coffee they supposedly produce.

Caffeine engenders dependence. Regular coffee drinkers readily confess to their need for a cuppa’ joe or get grouchy and groggy as the day wears on.

Caffeine has long been injected into fizzy drinks as the hook in a sweet and bubbly beverage. Energy drinks raise the caffeine bar to a jolting level, which can be taken into truly hazardous territory when mixed with alcohol. The body does not take well to stimulants and depressants simultaneously.